Elijah Funk gets weird — and gets noticed 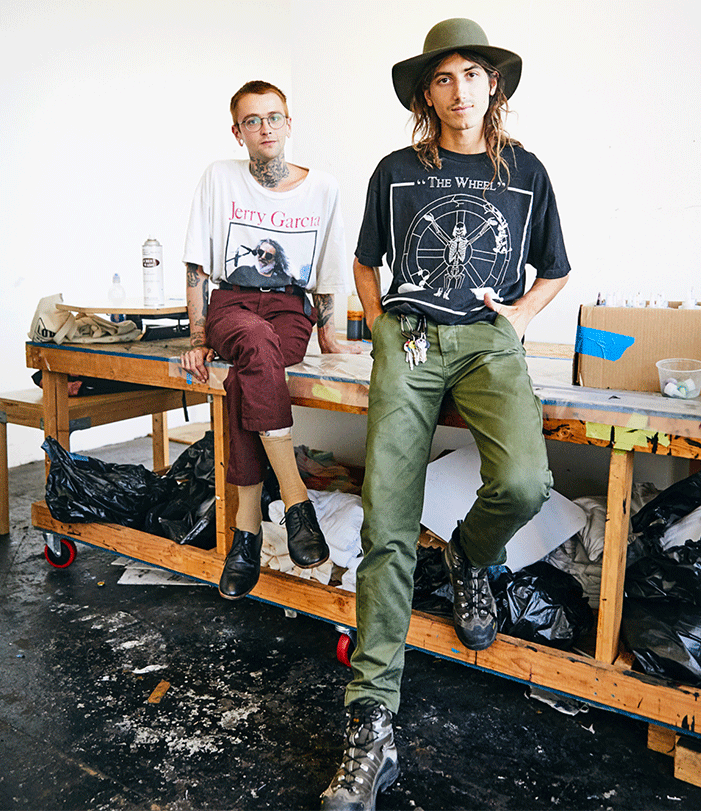 “I’ve always wanted to be a little bit weirder than the rest of the room,” he said.

That made Columbus College of Art & Design a natural fit for Funk. At CCAD, faculty and staff encourage students to be weird. Weird is welcome here.

“They were like, ’Dude, just be out there, be completely lunar,’” Funk said. “’It’s fine, as long as you know how to talk about it.’ They were pro us being weird.”

From print and paint to sound and animation, as a student, Funk was weird across mediums.

Now, though, he mostly designs T-shirts.

“I just want to make stuff — and T-shirts, designing them, was easy,” he said.

Easy and cost-effective. After graduating from CCAD and moving to California, he didn’t have the money for a studio. “But we could just print T-shirts in my apartment. We did it out of necessity.”

“We” being Funk and his friend-turned-business-partner, CCAD alum Alix Ross (Fine Arts, 2012). Funk and Ross are the minds behind Online Ceramics, the online retail operation that sells their designs — and one of GQ’s favorite new places to buy T-shirts.

Started as a creative way to earn a little money, Online Ceramics’ shirts were first mentioned in GQ in August 2017 as part of a story on John Mayer tie-dyeing a $500 T-shirt. Funk and Ross’ shirts were mentioned again in GQ’s guide to “the best new menswear items to buy right now.”

Then, in November 2017, Online Ceramics got a full feature. Funk and Ross had collaborated with John Mayer to produce shirts for the fall tour of Mayer’s Grateful Dead-inspired band, Dead & Company, and the magazine published an almost-2,000-word interview about their experience. And the duo will feature again in an upcoming edition of GQ as one of the magazine’s favorite T-shirt designers.

“It’s been crazy,” Funk said. “All of it just kind of happened, but I don’t think about it too much. Sure, I get excited, but the attention, that’s not what we’re in it for. We just wanted to make weird stuff.”

And the counterculture, psychedelic vibes of Online Ceramics T-shirts are weird. On the shirts, skeleton jesters and tie-dye butterflies accompany Grateful Dead lyrics and drug references in funky lettering that feels straight out of 1967. But people love it. The positivity and hippie-poetry of the Grateful Dead’s lyrics are as resonant now as they were in the 1960s, Funk said.

“It’s a sign of the times. People want to feel good.” Funk feels good right now, too — but also a little, well … weird.

To many people, Funk and Ross are now up-and-coming fashion designers. “Which is hilarious,” Funk said. He doesn’t see himself that way. “It’s really funny because I don’t care about clothes at all.” 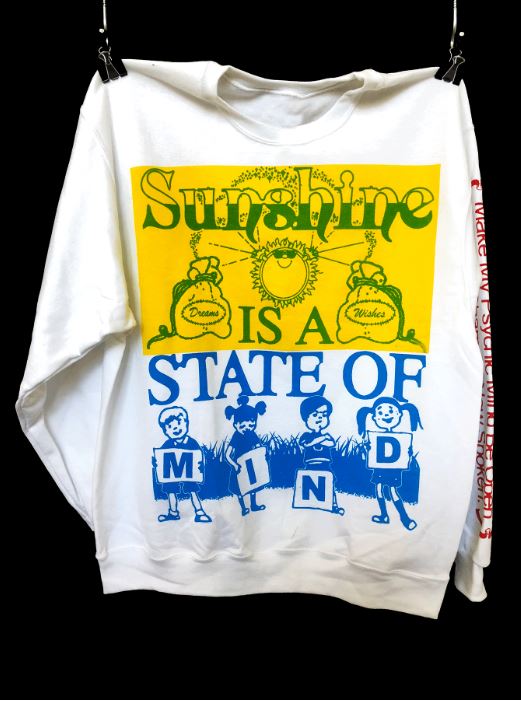 That’s not to say Online Ceramics won’t become a full-fledged fashion house. It just means he and Ross are going to do things their own way.

“We’re just two regular kids, basically,” he said. “We’re not functioning on a normal schedule. There’s no ’Oh my god, it’s February, we have to have our spring line.’ I won’t release stuff until it feels right. I won’t just do stuff just to do it, just to make money.”

Regardless of what he does next, however, Funk appreciates CCAD for equipping him to survive and work as an artist.

“CCAD was hard,” he said. “Things had to be perfect, up to the millimeter. And having to learn technical drawing and oil painting and color theory … at the time, it was like, ’Why are they making me do all these little mundane things?’”

But those little mundane things seeped in, almost unconsciously, and forced him to commit to his practice. “I appreciate the work ethic CCAD instilled in me,” he said. And I learned so many life skills that you wouldn’t learn at a ’normal’ school,” he continued. “Like how to use a saw correctly, and which drill bit to use when. Just how to survive.”

Online Ceramics is moving into a new, larger studio, and a third CCAD alum is joining the team.

“It’s kind of the dream, your college buddies all getting to bring each other up, ya know?”