How to run your own art gallery before age 40

Alicia Jean Vanderelli did not take a traditional path to her degree at CCAD, but her path since graduating has taken her to operating her own namesake gallery in one of Columbus’ fastest-growing art hubs. 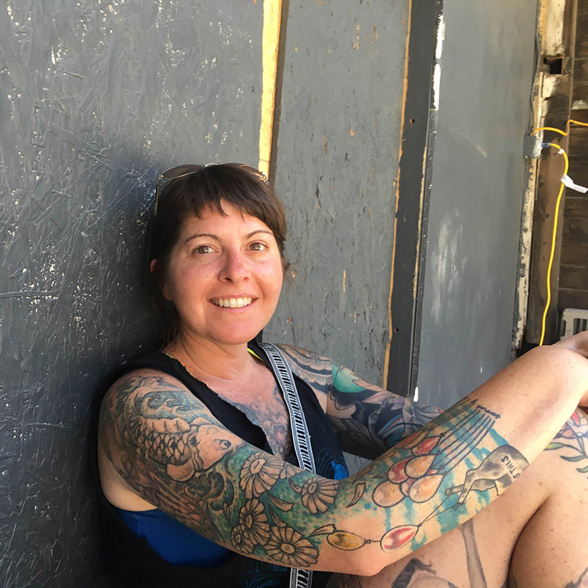 Vanderelli was born outside of Los Angeles before growing up in Panama City, Florida. After high school, she moved to Pennsylvania, then Florida, then to Columbus, which drew her to attending some classes at CCAD.

“The whole time I thought I wanted to be a poet when I grew up, then my words just sounded redundant and trite and boring,” Vanderelli said. “So then I started focusing on painting, because you could say the same thing in any number of ways.”

But after one semester of paying out of pocket, Vanderelli decided to move to Atlanta to pursue a career as a tattooist. Then, after more moves around the eastern U.S. — Orlando, Pennsylvania, Atlanta again — she found herself back in Columbus. In 2005, the death of her beloved grandfather spurred Vanderelli to complete the work she had started years earlier at CCAD.

“He didn’t mind me being an artist, but he wanted me to have a fallback plan and to get a degree,” she said. “So I ended up re-enrolling. I just said, ’Screw it, I’m gonna take out loans and I’m gonna do it.’ And so I did.”

Vanderelli said the decision to return to CCAD “was seriously the best move that I ever made.” She learned structure and concepts that took the self-taught painter to a point where she could, for the first time, truly call herself an artist.

“Everything I was doing I was doing from feel,” she recalled. “So I’m painting with like spackling knives and palette knives. Eventually Neil Riley called me out on it one day. He’s like, ’Why in the hell would you paint with this piece of metal? Paint with a paintbrush.’ ”

Vanderelli moved to painting with a brush, becoming obsessed with creating smooth lines, with learning “full-on tight realism” so she could then learn to play with it.

“You see somebody like Dali who could render a piece of bread that was so [realistic] you could see the crust and you know it's crunchy,” Vanderelli said. “And yet he could be so surreal and play with that … but he had those foundations.”

Though Vanderelli was, in her early 30s, older than the typical student, she formed bonds with her professors and set the foundation for her post-graduate work as a painter and eventual operator of her own gallery, The Vanderelli Room in Columbus’ burgeoning Franklinton neighborhood.

“I would say the CCAD did change my perspective,” Vanderelli said. “I was able to call myself an artist. I was able to gauge where I was creatively and felt supported artistically.”

After completing her studies at CCAD, Vanderelli would find that supportive community of artists would extend into the city — and many of them were fellow CCAD grads. She would be introduced to community living at Milo Arts and ended up renting studio space at the Columbus Idea Foundry and eventually 400 West Rich in Franklinton.

Vanderelli knew she had found a special community in 400 West Rich, because she was “meeting people who worked as much as me,” she recalled. “I would go to my day job for eight hours and then go directly to the studio.”

This hard work would pay off in both artistic output and deep ties to the Franklinton arts community, and eventually Vanderelli would open The Vanderelli Room, with a little help from her Franklinton friends.

“The defining moment I think for the whole experience was when I realized I needed help financially,” Vanderelli said. “We had this fundraiser that 70-plus artists participated in and donated over 140 pieces of artwork for a silent auction.” It raised almost $10,000 for some finishing touches on the space.

Operating one’s own art gallery before the age of 40 is a pipe dream in many cities, but Vanderelli is proof that Columbus makes those dreams more attainable.

“Everything is accessible [here],” she said. “It's really how bad you want it, and what you want.”

She encourages artists who want to follow in her footsteps to consider Columbus, touting her fit in Franklinton. “Everybody's so weird and so different, and you're like, ’Oh well, that's just him,’ ” she said of her Franklinton community. “Because you look at yourself and you think, ’God, I'm a freakin' weirdo, too, so …’ ”

Vanderelli also touts the unique art communities around the city, from Franklinton to Dublin to Grandview and more.