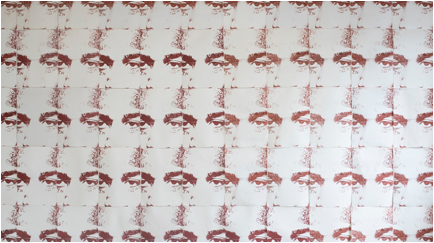 CCAD student Tyler Davis (Fine Arts, 2018) is one of six winners in the 2018 AICUO Excellence in the Visual Arts competition. The EVAs, hosted by the Association of Independent Colleges and Universities of Ohio, is the first intercollegiate online arts competition in the U.S. and showcases senior art students from throughout the state of Ohio.

The six winners were selected during a first round of judging by art faculty at Ohio private colleges. Davis and the other five student artists are now entered into a second round of judging by practicing artists. The student artist with the highest score will receive the Grand Award at the AICUO EVAs reception Thursday, April 5, in Canzani Center. The Grand Award winner receives a cash award along with a prize package that the rest of the award winners receive.

Davis’ printmaking work focuses on the absence of a father figure in a home, and style between men and media. He’s a member of the MINT Collective and Corrugate Contemporary Studios and was a featured artist in Vice’s The Creators Project. You can vote for Davis’ work to win the People’s Choice Award here!