Alumnus Jeff Pierson (CCAD 1999) was recently featured in West Virginia’s Charleston Gazette for his full-time work as director of arts for the state Division of Culture and History and his after-hours illustration work. 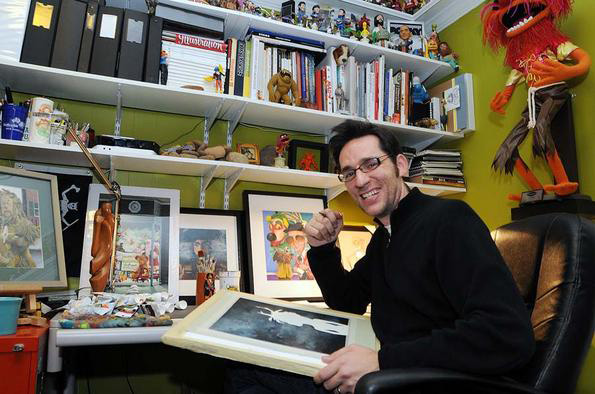 Pierson in his home studio. Photo courtesy of Charleston Gazette.

In the article written by Sandy Wells, Pierson tells his story—how his love for art took him from Charleston, West Virginia to CCAD and back again. We’ve published a portion of it here.

"In grade school, I remember getting in trouble for the first time when the teacher called my mom and told her they had a problem with me,” Pierson said in the article. “I wouldn't color in the coloring books. I had a moral dilemma at age 5 that if I didn't do the drawing, I didn't want to color it.”

“Originally, I wanted to be an animator for Disney,” Pierson continued. “I would watch Disney movies and old cartoons. I studied how the cartoon was made. When we were able to get VCRs later, I would pause them and watch frame by frame and see how things would move. I was fascinated by that process of animation.”

"I went to Columbus College of Art & Design—the place to go for animation—and actually did an internship with Disney. About the same time, I met Chris Payne, C.F. Payne, a guy coming in to teach illustration at the college. He turned me to illustration … Animation class was incredibly difficult. You draw and draw and draw just to get a couple seconds of film. With illustration, you draw once and you are done.”

"I [currently] work for the Division of Culture and History as the director of arts ... I'm an arts administrator … I administer grants. If you look across the country, West Virginia ranks in the top 10 in arts funding. That's my job. We find money and fund arts.”

"I make time to satisfy my love for illustration. I stay up late and get up early on weekends. I do a lot of commissioned portraits for people as Christmas gifts … I try to draw as much as possible. Drawing is second nature to me.”