In the past decade, the national press seemingly discovered Columbus as a Midwestern cultural mecca. Trend piece after trend piece praised the city for exceeding expectations, but invariably these stories all seem to zero in on one Columbus neighborhood in particular: the Short North.

If you’re wondering how intertwined the arts and Columbus’ rise to the national spotlight are, you only need to look at the role art has played in its signature neighborhood, a neighborhood the New York Times said is “challenging all preconceived notions of what passes for cool in the Midwest.” 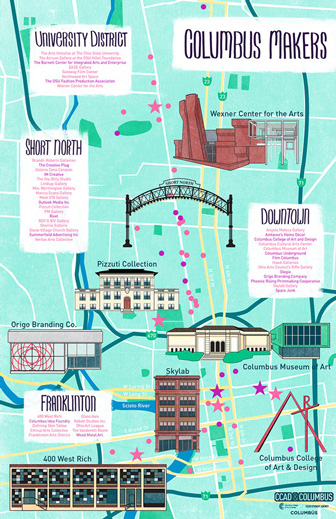 A boom began by artists

A walk through the Short North reveals a vibrant and bustling neighborhood full of eclectic shops and some of the city’s finest restaurants and hippest nightspots. And, perhaps most importantly, the spots that started the neighborhood’s boom in the first place, the art galleries.

The scene in the Short North today is hardly imaginable from a few decades ago. In the early ’80s, this once crime-plagued neighborhood became a beacon for artists. As pm gallery owner Maria Galloway once told the Times, “It was one of those neighborhoods that artists love to move into because the possibilities are there.”

The influx of artists led to the boom of art galleries that would pave the way for a reborn neighborhood. Established just over 30 years ago, the monthly Gallery Hop remains the district’s signature event, drawing thousands of visitors to walk the galleries — and the neighborhood.

Today on this relatively small strip centered on High Street, there are no less than 15 galleries, ranging from DIY mainstay of the district ROY G BIV to more recent additions like the Pizzuti Collection, which displays works of international renown.

The Short North Arts District is now undeniably one of the hottest spots to live, work and play in the city of Columbus.

Betsy Pandora is the executive director of the nonprofit advocacy organization the Short North Alliance, which represents more than 350 business and 700 property owners in the area. It’s a neighborhood that has fully blossomed around the artists and businesses that gave birth to it. “Foot traffic is constant now,” Pandora said.

The walkability and density of the neighborhood has also made it a highly desired place to live. Pandora said that 14,000 people live in the area already, and 1,000 to 1,500 additional units are being added in just the next six months.

In saluting those who began the neighborhood’s rejuvenation, Pandora also points to those who will build its future. “The first wave of pioneers are entering their third act, and we need to figure out who’s next,” she said.

With the district’s deep ties to the arts, the fingerprints of our graduates are everywhere in the Short North, as Pandora notes “the profound impact CCAD has had on our district.”

For example, Andrew Summerfield, a graduate of CCAD’s Class of 1998, has been working in the Short North since 1997. “I think it’s the most energetic area right now that we have,” he said.

Summerfield is the founder and president of Summerfield Advertising, and you can’t walk through the agency’s sleek Short North offices without running into a CCAD graduate, with no fewer than six present in a recent visit.

Summerfield explained why he hires so many CCAD grads, and it’s not just his personal ties to the school. “They have the right skillset,” he said. “They understand visual communications.”

At ROY G BIV, 2006 Fine Arts graduate Molly Jo Burke recalls, “Before I graduated, ROY was kind of the cool kid on the block.” Now she serves as president of the Board of Trustees of the gallery.

“[ROY G BIV] was pretty much started by CCAD grads,” said Burke. It’s the second-longest running gallery in the district, and they have no plans to leave. “We love the Short North, and we’d like to stay here as long as we can.”

A place for artists to thrive

Artists are responsible for the present-day Short North, but they also play a big role in its future.

Pandora sees the district as a magnet for the talent at CCAD, both before and after graduation. “Students experience us a part of extracurricular life,” she said, noting the opportunities that are presented to them via the Short North.

“You can go to this amazing school, meet alumni of that school and end up in a gallery here,” she said.

Also that Midwestern flair that surprises writers of the New York Times and others has other benefits.

“You can form your identity [here],” Pandora said. “There’s an engagement and authenticity that is greater than, say, Brooklyn.”