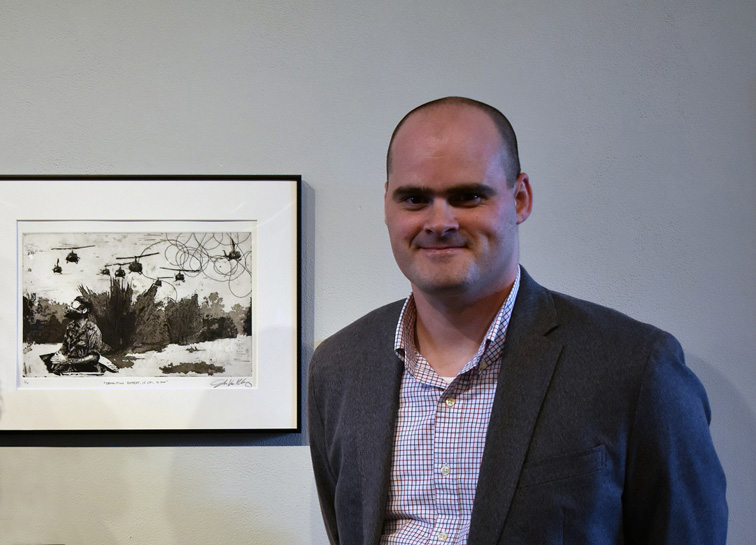 If you ask CCAD alum Joe Van Kerkhove (Fine Arts, 2001), America’s veterans tell really compelling stories — but most people never hear them. Even his father, a navy veteran, rarely shared stories from his time in the military with his son.

But Van Kerkhove found the stories his father did share compelling, and he always wants to hear more stories like them. Somehow, he determined, he would work to bridge the gap between veterans’ stories and civilian audiences.

And in that spirit, Van Kerkhove and his colleagues at Tiffin University (where Joe now works as a professor) began the EVAC Project. Short for “Experiencing Veterans and Artists Collaborations,” the EVAC Project pairs veterans and artists from across the country to produce a series of art prints that bring the veterans’ stories to a broader audience.

For the EVAC Project, veterans — from all branches and backgrounds, and from all over the country — were interviewed about their personal experiences in the military. Some interviews were as brief as 30 minutes, and some went on for several hours, but once a veteran had finished talking about his or her experience, a recording of the interview was shared with a volunteer artist. Each veteran was paired with a different artist, and the artists were tasked with creating a piece that responded to their veteran’s story.

“As an artist and professor, I look for projects to push groups that wouldn’t talk together and force interaction,” Van Kerkhove said.

But while finding compelling veteran stories was relatively simple, finding artists to participate was a struggle: Van Kerkhove and the other project coordinators reached out to more than 90 artists to find the 23 who would ultimately each respond to a unique veteran’s story. Among them were several artists with CCAD connections, including CCAD Fine Arts professor Kathy McGhee and Michelle Rozic (Fine Arts, 2003).

It was a big ask, Van Kerkhove said. Artists who agreed to help would be volunteering their time and donating 10 prints of their finished work.

Because of this, Van Kerkhove and his colleagues were blown away by the artwork they received: “We weren’t expecting the work we got,” he said.

Given the size of the commitment, they expected to receive small, relatively simple pieces.

“Instead, we got a variety of scales and colors and techniques,” he said. The artists’ responses to their veterans’ personal experiences have run the gamut of styles.

For example, McGhee approached her piece for the EVAC Project like she does the rest of her work. Kathy likes to contrast serious and playful elements in her work to create a sense of unease, and this juxtaposition can be seen in the silkscreen print — titled Games, and featuring children flying bumper car-inspired airplanes — she based on her veteran’s story as well.

“My veteran is a woman and an Air Force veteran,” Kathy said. “Her interview focused on her experience of being a woman in the military. I wanted my piece to capture her overall experience instead of a singular moment.”

Two more prints from each set will be held by the EVAC Project for exhibiting. Excerpts from the recorded interviews will be displayed alongside the corresponding prints during the exhibitions.

And the remaining seven prints of each set will be sold at auction, and the proceeds from the auctions will be given to charitable organizations dedicated to supporting America’s veterans.