If the early signs are any indication, 2017 will be a pretty good year for Shae Beagle (Illustration, 2017).

The Independence, Kentucky, native will graduate Columbus College of Art & Design this May with a bachelor's degree in Illustration.

And they’re also prepping for a big summer: Beagle and a small group of collaborators with CCAD ties recently inked a deal with Image Comics for Moonstruck, a series following a coffee shop barista in search of a normal life who has one problem: She’s a werewolf. The first installment of Moonstruck is expected to land in July.

“I never really grew up with Marvel or DC Comics, that was just something that my family wasn’t into, so I wasn’t into,” they recalled. “But I always read the Sunday funnies with my grandpa and we liked Peanuts a lot because Snoopy was a beagle and our family’s name is Beagle, so it was really funny and we would put those up on our fridge."

“Around high school, I read a lot of manga and stuff but, in terms of storytelling, I liked self-published indie comics,” they said.

Beagle had artistic chops, but they didn’t always get support from high school art instructors. “My high school experience was, ’if it’s not realistic it’s not art.’ … I didn’t really have a direction until later in high school. I just liked to draw. But I didn’t know of jobs in that field at all,” they remembered.

By contrast, at CCAD, Beagle said, “when I was starting to just dabble in making comics and showing professors my comics, they were really encouraging with that and I thought, ’Hey, I can do this, that’d be fun.’ … It was really nice to hear from professors who were already in the professional world, telling me that you can do this and make a living out of it.”

One of those professors, Laurenn McCubbin, Assistant Professor of the newly created Comics & Narrative Practice major, “has been absolutely the most important person in getting (Moonstruck) to published form,” Beagle said.

McCubbin, Moonstruck's editor, has been one of Beagle’s instructors since their first year at CCAD. “She’s always encouraged my artwork, and now we’re working together in comics, so it’s pretty interesting,” Beagle said. 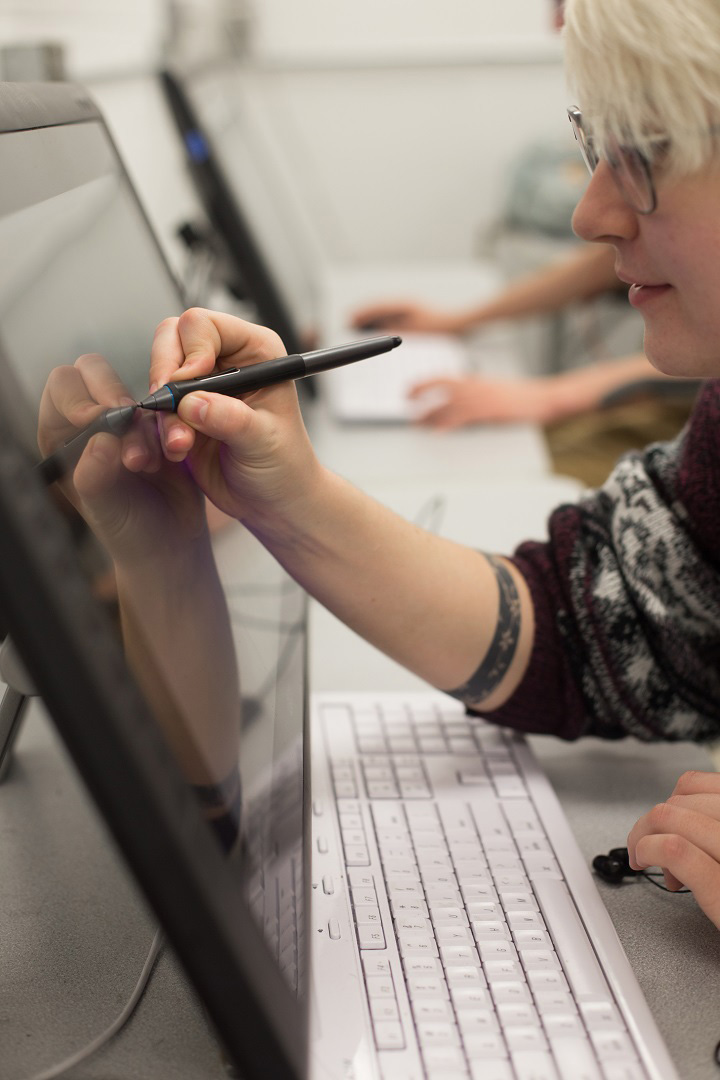 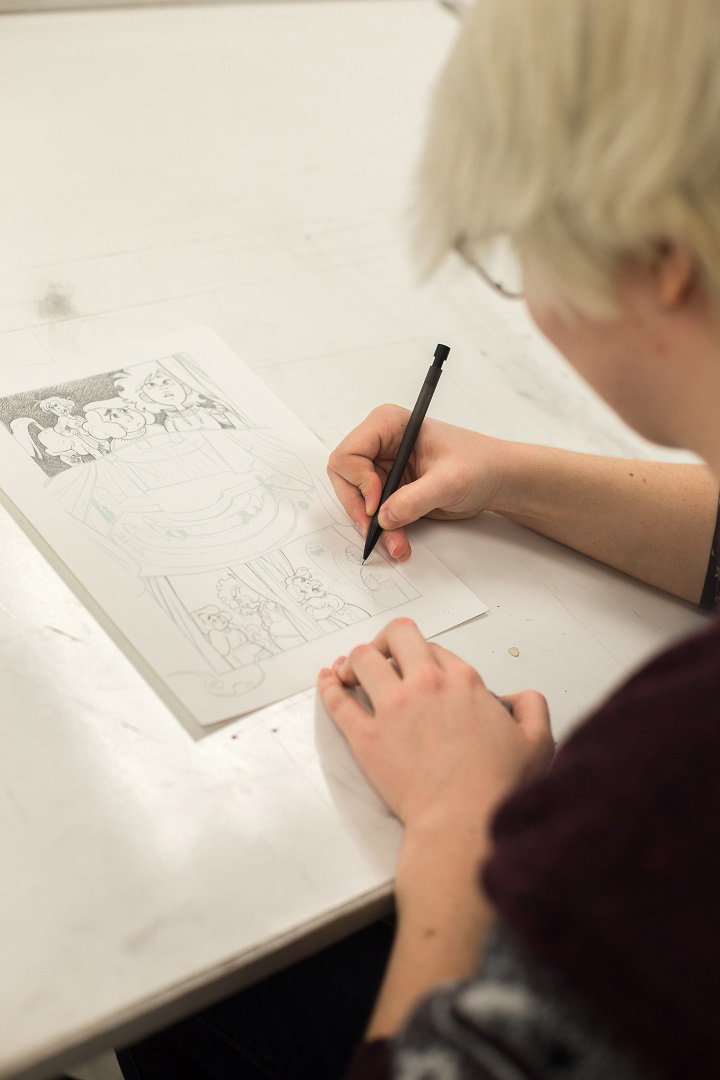 In addition to Moonstruck, Beagle is working on a 30-page comic for their capstone class, sharing a personal story, and learning more about bookbinding, bookmaking, and zine-making.

When not drawing, Beagle enjoys joining a crowd of friends every Wednesday night for karaoke at Dirty Frank’s West. It’s a stress-reliever, they said: “It’s good to just let loose for the week, sing badly up on stage, eat a hotdog, and forget about all the work you have to do for a couple of hours.”

Of course, with graduation and publishing deadlines both looming, that time has been limited — “but once the semester’s done, it’s going to be my saving grace,” Beagle said.

And although Beagle’s graduating CCAD this spring, they plan on sticking around Columbus, which has become an increasingly comics-friendly city.

“I know a lot of comic creators are moving to Columbus, I guess partially because it’s cheaper to live here; but I think it’s getting around that everyone is coming here and they’re seeing things like SPACE, CXC, and all those independent comics things that are happening in Columbus. It’s becoming a hot spot. Everyone is gravitating towards here and telling their friends, ’Hey come to Columbus,’ ” they said.

A comics connection, from ‘Spitball’ to ‘Moonstruck' (click to read more)

The two collaborated on a piece in Spitball, the college’s annual comics anthology.

“It was a really good match! I was a fan of Lumberjanes and really enjoyed the storytelling of that book. … Our senses of humor and general demeanor really worked well, so we made a good team,” Beagle said.

Spitball wasn’t the end for this duo.

In March of this year, Beagle and Ellis took to the stage at the Emerald City Comicon in Portland, Ore., for a big announcement: The debut of their new comic, Moonstruck, published by Image Comics. Moonstruck follows Julie, a barista who, in a world of magic and monsters “wants to be the most normal girl,” said Beagle. “She doesn’t want any attention brought to her, she just wants a normal life, a normal girlfriend, a normal job — and everything just kind of happens around her to make this impossible.” 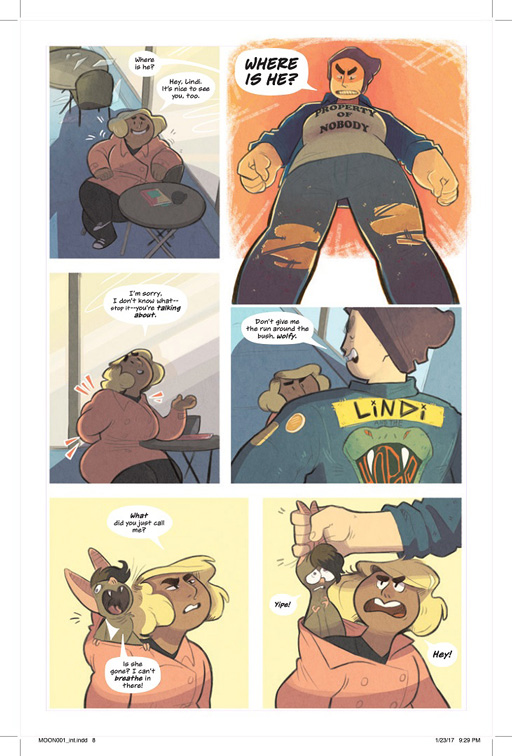 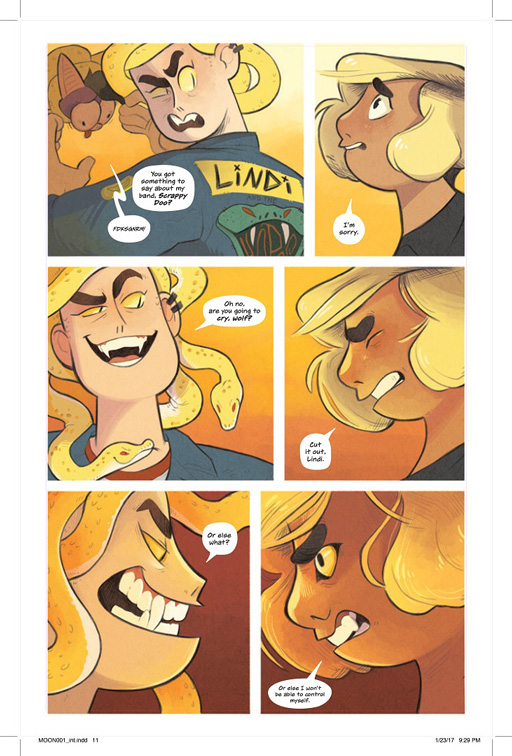 The news of the new comic at Emerald City, Beagle recalled, “was very well received. We got a lot of claps and happy sounds” from the crowd.

The Beagle-Ellis collaboration for Spitball serves as a prequel of sorts for Moonstruck, which is due to be released at the biggie of comics conventions, the San Diego Comic-Con in July.

And Moonstruck’s CCAD ties go beyond Beagle and Ellis. Laurenn McCubbin, Assistant Professor in CCAD’s Comics & Narrative Practice, is editor on the project.

Beagle said Moonstruck would not be possible without McCubbin, who was previously art director for Image Comics, and remains closely connected to the industry.

“Lauren has been absolutely the most important person in getting this to published form,” they said. “She was originally the one who look at the story and said, ’Hey, there’s this whole world here that we could expand on. This story would do really well in the market right now and I think it’s an important story that we could be putting out. How do you guys feel about doing that?’

“She really brought us all together and made this happen. She’s been great about getting us to people who it needs to see. I can’t thank her enough for all that she’s done,” Beagle said.

and her style has always sort of worked with mine,” Beagle said. “We always had similar tastes and colors, so I think it was just a really good move to bring her in.”

Process-wise, Ellis handles most of the script-writing for Moonstruck; McCubbin edits the script, and Beagle weighs in regarding the visual structure.

“I don’t change a lot of the story. I think it’s awesome the way it is,” Beagle said. “But we usually meet every week or so. … We don’t like to send a series of emails; we actually like to get together and have coffee and go over scripts or pages that we’ve done.”

In the midst of getting ready for Moonstruck, Beagle is also preparing to graduate CCAD in May.

“It’s been a whirlwind, but it’s been really really cool,” they said.

Although they were drawn to CCAD for its Illustration major, Beagle said they are thrilled that the college will offer a Comics & Narrative Practice major, beginning in fall 2018.

“That’s even cooler,” they said. “If I saw a school with a Comics major while I was looking for college, I’d be like, ’Heck yeah, I’m going there!’ ”

A comics artist grows at CCAD (click to read more)

Before they’d inked a deal to publish Moonstruck through industry powerhouse Image Comics, Shae Beagle (Illustration, 2017) was a student with a passion and drive to explore and perfect their work.

Below, Beagle discusses their journey as an artist, from an early class with Laurenn McCubbin, Assistant Professor of the newly created Comics & Narrative Practice major (and now, one of Beagle’s collaborators as editor on Moonstruck), to learning new tools and techniques that they still use today. 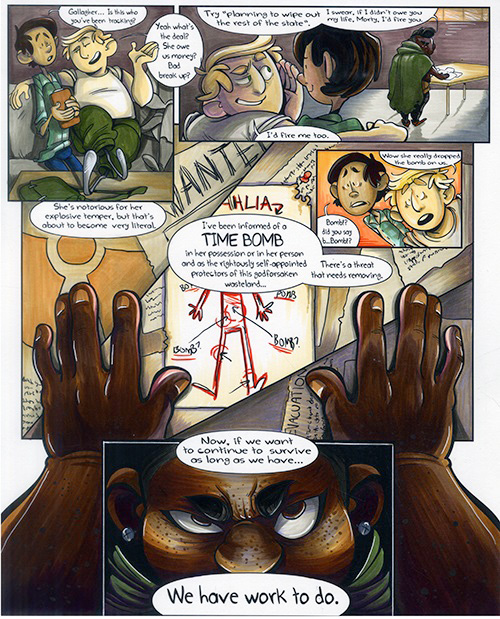 The one titled with just my name is a comic I made freshman year in my color theory class in 2014 (taught by Laurenn McCubbin!). I was doing comics WAY differently back then, using Illustrator for my lines because I didn't really get Photoshop yet, and coloring with marker (takes forever, do not recommend). 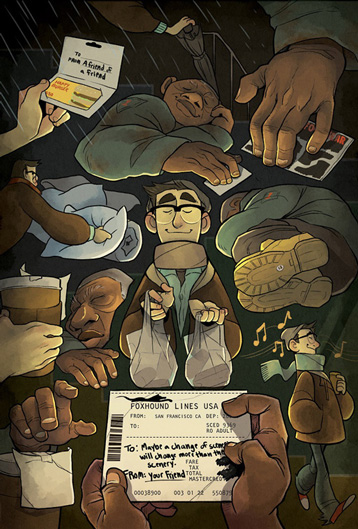 This is a page from my Spitball comic in 2015. Now I can use Photoshop, and can do the whole thing digitally, but I'm still a little color shy. Writing by Lora Innes.

“SS1” is a page from a short guest comic I drew for my friends' webcomic called Riven Seal. (This was in about 2015 as well). Here I'm using my pencils as my final lines, and though I've refined that, I'm still using that style for Moonstruck! Writing and lettering by Julie Wright (Illustration, 2009) and Amanda Gomes.

Entertainment Weekly, Uproxx, Amy Poehler's Smart Girls, and The Columbus Dispatch are among the outlets that have been moonstruck by Beagle's comic. Check out press coverage here.