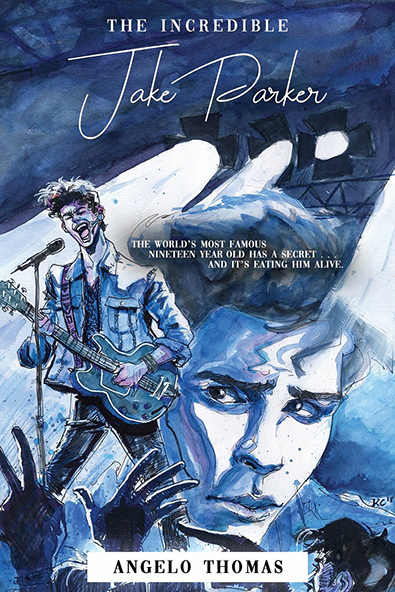 After creating a documentary short about his experience with an eating disorder, CCAD student Angelo Thomas (Film & Video, 2020) wrote his first novel about a pop star recovering from anorexia. Now that novel will be a full-length feature film premiering Friday, Sept. 4, 2020 on Vimeo.

The book, called The Incredible Jake Parker, was released Sept. 3, 2018, and made its debut with a book signing at The Book Loft in German Village on Sunday, Sept. 9, 2018.

Most recently, it received the green light to be made into a full-length, low-budget feature film directed by Thomas. Shooting took place over summer 2019 in Louisiana; producer Leigh Scott is Thomas' longtime mentor.

The Incredible Jake Parker tells the story of 19-year-old pop music sensation Jake Parker whose musical career is put on hold as he goes to residential treatment to recover from anorexia.

In the spring 2019 semester, in preparation for his feature film directorial debut, Thomas worked on an independent study project with Film & Video Professor and Chair Nella Citino on three Jake Parker short films that will set the groundwork for the feature.

“I wrote The Incredible Jake Parker as a screenplay before I ever thought about writing the book, so I’ve always envisioned it being a feature film. It’s a dream come true to have the opportunity to make the film this summer, and I can’t wait to get started and to share that experience with everyone,”  says Thomas.

Thomas says the book is one of the first fictional works to be published with direct approval from a nationally recognized organization for eating disorders.

A quarter of the profits from the book’s sales are going to The National Association of Anorexia Nervosa and Associated Disorders, and another 25% will be donated to The Center for Balanced Living in Columbus.

Learn more about the Film & Video program at CCAD or apply here.