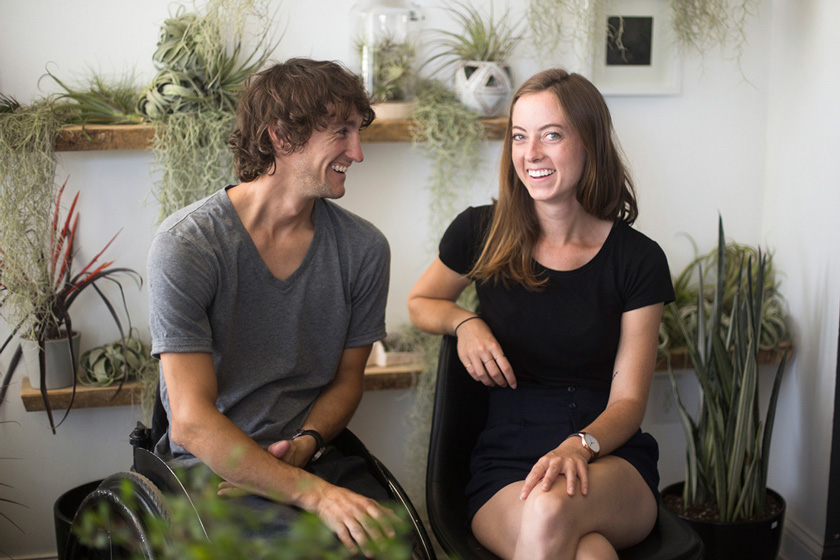 A few years ago, Brian Kellett and Emily Brown probably didn’t seem like the plant store type. Brian, a CCAD-trained photographer, was working at Rockmill Brewery, and Emily was studying industrial design at CCAD. But after Emily worked on a project about the horticulture industry as a student at CCAD, things changed. In 2015, the couple opened STUMP, a dreamy plant shop that looks more like a gallery than a garden center.

At the end of business on a Sunday afternoon, Brian and Emily reflect on a busy weekend of pairing customers with indoor plants. But a lot more has happened in the shop. A couple of people from LOKAL Cold Brew are on their way out the door — they’ve been making pour-over coffee for customers all day. An artist in residence in the upstairs apartment — he’s free to use the pottery wheels inside the shop and can fire work in one of two kilns at Brian and Emily’s house. And, once a month or so, the shop hosts brunch, cooked by Columbus sous chefs who have a chance to step into the starring role and create a menu of their own. STUMP, on a quiet commercial and residential strip of Fifth Avenue between Weinland Park and Interstate 71, it turns out, is about a lot more than plants.

“Lokal just comes in here and uses the space. We don’t charge them or anything. It makes Sundays a totally different experience than if they weren’t here,” Brian said. “Sam [Ryo, one of the Lokal founders] was talking with people he’s met recently. I asked him, ’How do you know them?’ And he says, ’We met them through STUMP.’ The next steps in their business plan are going to happen because of the people they’ve met here.”

That is what a lot of young entrepreneurs in Columbus would call living the dream: Brian and Emily are not just getting gorgeous green plants into customers’ homes and lives. They’re building community and collaboration among friends and fellow artists and business owners.

And that’s possible in Columbus, where the cost of living is low enough that artists and designers can make a living doing what they want.

STUMP is a cocktail of Emily and Brian’s many talents and interests: Brian is a photographer, teacher, designer and sometime furniture maker who has worked for Lancaster brewery Rockmill for about six years. Emily graduated in May 2016 from CCAD with a degree in industrial design. The plant connection came through the CCAD MindMarket, where Emily worked on a project conducting nationwide research into the future of the American horticulture industry. She visited nurseries and garden shops across the country to find out whether millennials had any interest whatsoever in growing and living with plants. Long story short, the answer was yes, even though the industry as a whole was not succeeding in appealing to younger customers.

So she and Brian set out to open a plant shop that would have broad appeal. Millennials are a huge part of their customer base (they don’t do any formal advertising, but maintain an Instagram account filled with sumptuous photographs that act as customer catnip), but on a recent busy Saturday, the people milling around the store and marveling at plants represented a wide range of ages and backgrounds.

Before opening STUMP, Emily owned two plants, one mint and one basil, and they were both dying. “The more time I spent around them, the more I thought, you can learn about this,” she said. “And now a year and a half later, I have a shop full of plants.”

Emily Brown is a co-owner of STUMP. She graduated from CCAD in May 2016 with a BFA in Industrial Design. Emily grew up in Louisville, Kentucky.

Brian Kellett is a co-owner of STUMP. He’s also an adjunct faculty member at CCAD, teaching photography. He has a BFA in photography from CCAD and a master’s degree from the University of California Santa Barbara. (P.S. Yes, they are dating.)

Ray is STUMP’s shop dog and unofficial mascot. He’ll be happy to greet you if you stop by.

STUMP's success caught the attention of the New York Times . Read about how the store is bucking retail trends here.