They found that while the Discovery District had a strong reputation for its arts and educational institutions, diversity, green space, and historic buildings, the area is not walkable and major points of interest are isolated. Broad Street acts as a barrier running through the center of the district, cutting these points of interest off from one another.

Building on these findings — along with the six themes that emerged when respondents were asked to describe the district (Knowledge, Creativity, Discovery, Transformation, Diversity, and Historic Meets Contemporary) — came the recommendation to create a Discovery Trail that uses streetscape improvements, wayfinding, and public art to connect attractions and make the area more walkable.

The Discovery District Placemaking Plan describes the first phase of this Discovery Trail. It would connect the Columbus Museum of Art and the Columbus Metropolitan Library with a pedestrian-friendly loop along Washington Avenue, Gay Street, Broad Street, and Grant Avenue. 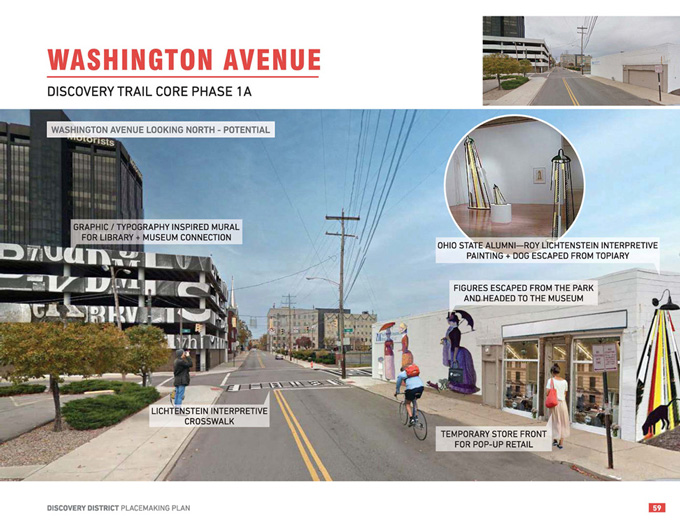 This Discovery Trail would have an “Escaping Elements” theme, whereby artistic elements “escape” one attraction and appear at another, highlighting connections between the two locations (see image above). The library and museum could be connected by murals and literary elements along the trail to highlight their proximity. An example of this already exists in the Topiary Park, where figures have “escaped” the painting A Sunday on La Grande Jatte and transformed into topiaries.

While these are all potential ideas and not complete proposals, Discovery SID is currently conducting a capital campaign with the goal of securing up to $2 million in funding for this first phase of the Discovery District Placemaking Plan from public and private sources. A Discovery SID committee will develop a process for selecting artists and projects for these potential ideas and others.

For more information, contact Cass Freeland at clfreeland@sidservices.com or 614-591-4584.