Fahion Design student presents her invention to Under Armour

On March 1 at The Design Future Show competition, Carissa Gooding (Fashion Design, 2019) presented an innovative new yarn she invented and discussed its potential use in athletic wear to help relieve pain for runners.

Gooding was one of three apparel finalists chosen from applicants across the country. She outlined her idea in the Odyssey Theater in front of an audience of more than 300 Under Armour employees, as well as the competition’s panel of judges: David Dombrow (UA Chief Design Officer), Noreen Naroo-Pucci (VP UA Global Design Engine), and Justin Howe (Senior Director UA Footwear). 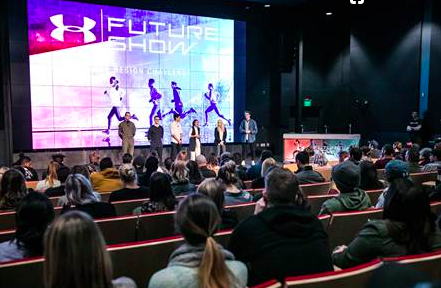 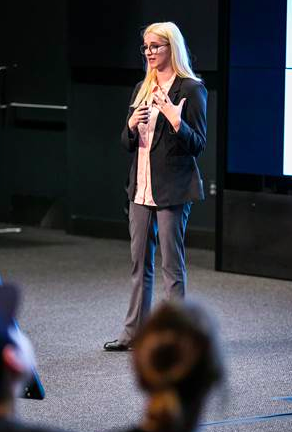 ”This has definitely been the hardest project I’ve ever worked on because it wasn’t something that was flat. It had a lot of depth to it,“ says Gooding, who was also taking 18 credit hours as she worked on her competition presentation outside of class. ”It challenged me to think differently and think in a more practical way about my design. It had to have research and thought behind it about how the fiber works. It’s not just something that looks pretty. It’s functional, too.“

Gooding and Nix met twice a month to discuss what issues the athlete was having, which gave Gooding a better understanding of how an athlete wears their workout clothes and what they need those garments to accomplish.

But the biggest unmet need in the market — for Nix and her fellow student athletes — was a solution for joint and muscle pain that creeped in during their runs.

Her concept takes a solid form of Trolamine Salicylate, which is the active ingredient in joint pain relievers, and wraps it in polyester fiber. This creates a new yarn called Moraletin (an anagram of Trolamine and a nod to the morale-boosting effects a fiber like this could have for athletes). Moraletin would then be woven into a jersey knit, a popular fabric with athletes.

Gooding’s competition presentation also highlighted how Moraletin would be inexpensive to make and used in pads that slide into different joint points of a pair of running pants, tops, or other performance clothing. The pads could easily be replaced after a certain time period.

Though Gooding didn’t win the competition’s top prize ($1,000 and a 12-week Under Armour internship), she says she’s more than happy with the results.

In addition to making many professional contacts at one of the industry’s top brands, she toured Under Armour’s campus and learned first-hand how the company is working on innovative new ideas itself.

”This process helped me learn to present in front of a bunch of people, and putting this together encouraged my thought process and growth,“ Gooding says. ”It forced me to think about professionalism and what happens after graduation. I feel so fortunate. I’m so thankful for this opportunity.“

Read more about the Under Armour competition here.