Getting inside Matthew Mohr’s head 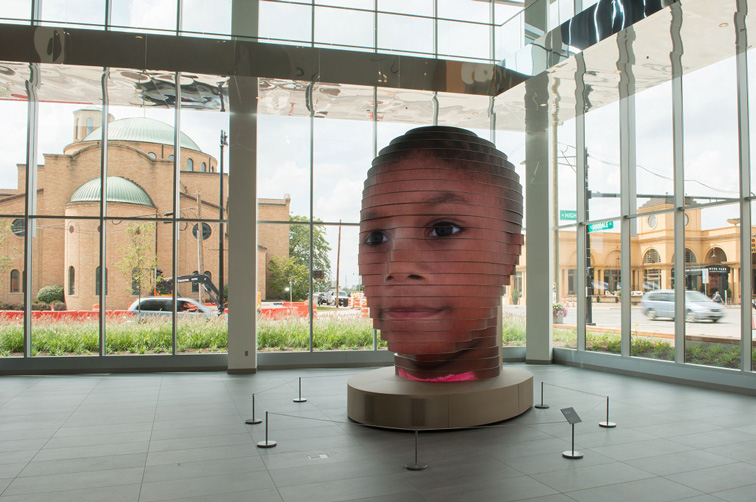 An interactive LED sculpture by Columbus College of Art & Design Advertising & Graphic Design Associate Professor Matthew Mohr will be the centerpiece to the entrance of the newly renovated Greater Columbus Convention Center.

Intended to be a signature attraction in Columbus (a la Cloud Gate, a.k.a The Bean, in Chicago), the work, As We Are, is a 14-foot, 3D human head made from ribbons of ultra-bright LED screens. The sculpture contains a photo booth capable of taking 3D pictures. After visitors have their pictures taken, they will step out of the booth and see their portraits depicted as the face of As We Are.

What was the inspiration behind As We Are?

I did some research around traveling to unfamiliar cities and thought a lot about how I would like to engage an energetic new place. In my head, I have an always-simmering cauldron of culture, news, technologies, and work by people I respect, but the idea came to me during an interview with a board member about business travel. Primary research — just like we teach our students.

What is now known as As We Are was one of several ideas I half-sketched or wrote down as we were talking, and only after the conversation did I grasp its potential. It was a true “all synapses firing” moment, thinking about what it might say about our culture, diversity, and how much fun it would be to interact with. 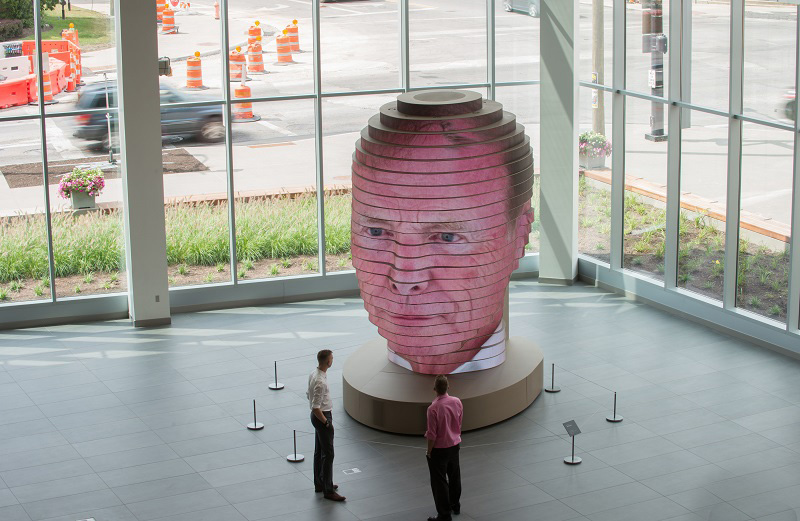 What was the process like to land on this final design?

The opportunity with the convention center was an invitational call, and my ideas were in with a stack of what looked like about 50 other ideas. I think what is amazing to me and speaks to the integrity of all involved is how similar the final piece looks to the original proposal.

The Franklin County Convention Facilities Authority Board of Commissioners (which owns and operates the convention center) has been incredibly supportive and very involved. Design Communications Ltd. out of Boston won the RFP, and they've been kindred spirits throughout the process. Fringe22 helped me with diversity research and branding. The best, best, best part of this has been working with people with a very high level of expertise in pursuit of a concept that steps outside of the norm.

You’ve said that this is a return of sorts for you in terms of art-making. What was it like to return to this type of creative process?

It felt great to be back in the saddle on this project in scale, scope, and teamwork, but in terms of process, there really hasn’t been much of change.

The processes that I learned in business and in grad school inform what I do now and how I teach at CCAD. In fact, it all contributes to a couple of overarching themes throughout my career: technology in service of communication and following basic humanist principles.

I respect the potential of every one of our students and believe that they will use their hard-won skills to make things better for others in some way. And although I don’t want every student to follow my lead, aesthetic, or specific values, I do want them to benefit from the processes I’ve learned to express themselves through their work — and that includes designing for commercial purposes.

What kind of response have you gotten from people who have seen the work (or the work in process)?

Many people see technology as a necessary evil or another appliance. When it is used in service of conceptually driven content, it can become magic, especially when it leaves the screen and becomes physical interaction.

The experiences of people doing user testing ranged from delight to trepidation to preoccupation with what it means or how it works. The project manager had to shoo coworkers and visitors away because productivity in their shop was dropping; people would just stop and stare at the sculpture when faces were displayed on it. 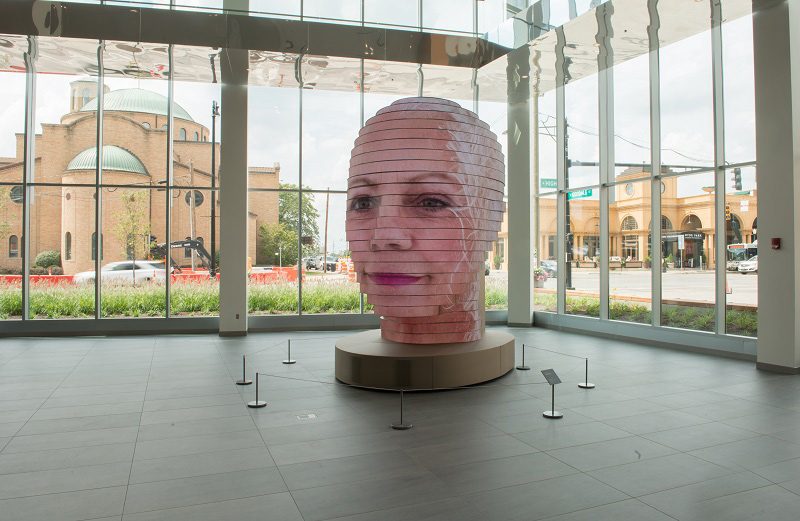 What experience do you hope this creates for convention center visitors?

I’m asking some questions with this work. I may have some theories about how people will react to it but as a first-of-its-kind experience, I can only be curious. Much of this is covered in my artist statement.

I am fairly certain that for most, it will be a fun experience, which is part of my intent. I would like people to think of it as a point of engagement with the city.

As a humanist work, I hope people will reconsider themselves and people from our community, as well as value and respect our visitors.

As a work of art, I hope people see a reflection of where we are culturally and in social media both good and bad. On this level in particular, it may be a fairly intense experience for some.

How meaningful is it to have your work in a place that will be so highly trafficked, both by locals and those visiting central Ohio?

FCCFA Commissioner Barbara Nicholson said in a press release that “this is a unique and iconic piece of art that we believe will come to be identified nationally with the city of Columbus, like Cloud Gate (or The Bean) in Chicago,” which kind of freaks me out because I hold that work's creator, Anish Kapoor, in very high regard.

The journey to this point has been very meaningful and very fulfilling. If the sculpture opens or advances conversations around all of the issues addressed, I will be happy. If it achieves notoriety in a good way for Columbus, I will be pleased because I will have accomplished what I was offered a chance to do. Mostly I’m grateful for the opportunity and confidence invested in me. 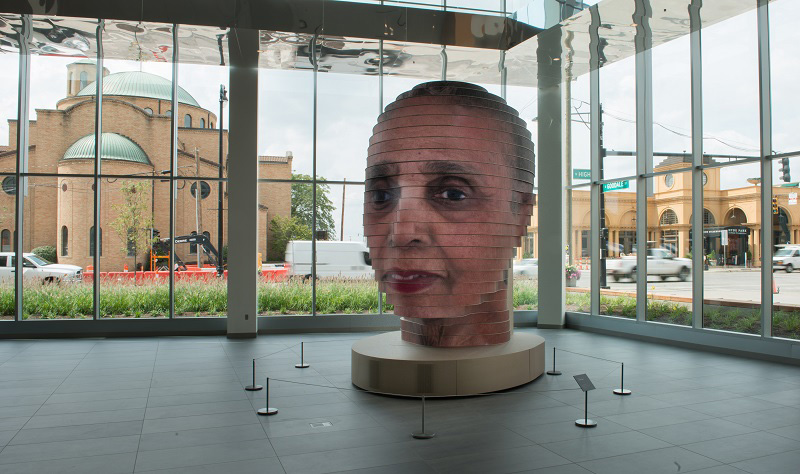 The semester just started, and I’m hoping we have a great year! I’ve heard we have another strong group of seniors. We will see how they measure up in the tasks ahead. This moment in my career may be an opportunity to join the amazing conversation happening in art right now. If offered, I would love the opportunity to collaborate and contribute to the dialogue, and challenge what can be said with form, engagement, and technology. 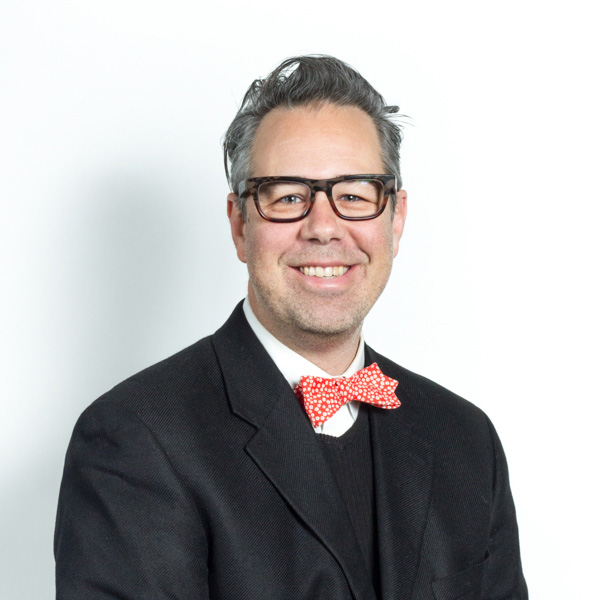 Matthew Mohr’s project for the Greater Columbus Convention Center has been covered in The Columbus Dispatch here and here and in Columbus Business First, and will be part of a public tour of the convention center on Saturday, Sept. 2, 2017. Read a press release about the sculpture and the newly renovated convention center here and find additional coverage from outlets such as The Huffington Post here.