How a creative found a community at CCAD 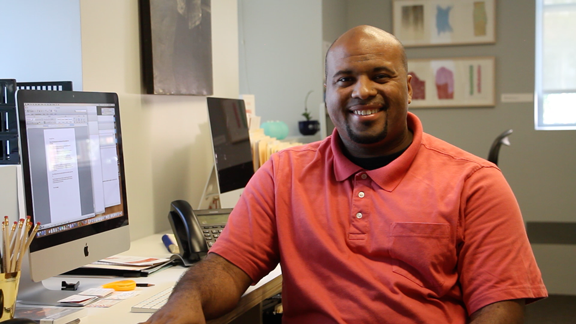 Art school was an inevitable destination for David Butler.

The son of an arts educator, Butler grew up in a house where his affinity for drawing was always encouraged — even when he was being punished.

“My punishments would be part of my skill set,” Butler laughed. “[Mom] would be, like, ’Go in the room and draw the vase in the corner.’ … She would make me do life-drawing classes as punishment.”

In high school, Butler’s family relocated from Cincinnati to a mostly white suburb nearby, a move that would end up solidifying the role of art in his life. “That was the first time I ever had to be a black face in a mostly white space,” Butler said. “So I would draw pictures of my teachers and draw pictures of students. That's how I got people to like me … reacting to my world with my art.”

“So I started taking [art] seriously in high school,” Butler recalled. He got a summer job at 15 as a caricature artist at the Cincinnati-area amusement park Kings Island. “At times, I would make like $1,000 [in a week]. Imagine yourself at 15 with a $1,000 paycheck from a summer job.”

So when Butler’s high school guidance counselor essentially plopped him down in front of a computer linked to the Internet, his search brought up CCAD, among other art schools. He weighed his options and ultimately decided to enroll here in 2002.

Butler didn’t know it at the time, but that decision would have a lasting impact on both him and CCAD.

How a Creative Found a Community at CCAD from CCAD Mar/Comm & Student Agency on Vimeo.

“CCAD was like the size of my high school, so it was very easy to transition to,” Butler said.

“But when I got there, I was really shy. CCAD is where I found my collective. The people I met in my dorm freshman year are probably the best friends I have ever had in my entire life.”

While Butler noted the cultural and ethnic diversity of the CCAD student body when he started, he also identified a need to bring together students of color. “We still had to find community with each other. The great part was that CCAD was always willing to allow that community to develop in any way it chose how,” Butler said. “So we started an organization called the African Cultural Association in my tail-end of my freshman year in 2002–2003.”

As a sophomore, he would go on to lead that organization, which he notes is one of the longest-running student organizations at CCAD. “It's come in different forms, and it's changed names a few times, but [the alumni have] been there every step of the way,” Butler said. “We have all still been connected with the black student organization on campus. And we've mentored these young kids. We've ushered them through with us.”

Butler graduated in 2006. And since then, the concepts that cemented in his freshman year dorm still are huge in his life. “The idea of community for me, of working within the collaborative, was born at CCAD.”

Since then, Butler has worked the “three lanes” of his career as an arts professional, arts educator, and studio artist. He currently works as the Education and Outreach Coordinator for the 18,000-square-foot non-profit gallery space the Pizzuti Collection and serves on the board of Creative Control Fest, an initiative meant to unite and educate around issues of diversity in creative fields.

Finding that sense of collaboration came to Butler at CCAD, where he also served as admissions officer after graduation. He says he used to issue a challenge to prospective students. “I want you to go out and find somebody that has the exact same model that CCAD has, and then come back and tell me if you want to go there,” Butler said. “If you can find that, go ahead.”

“You always want to go with your gut. When CCAD shows you what it can do for you, it usually hits you in the gut: This is the spot for me.”