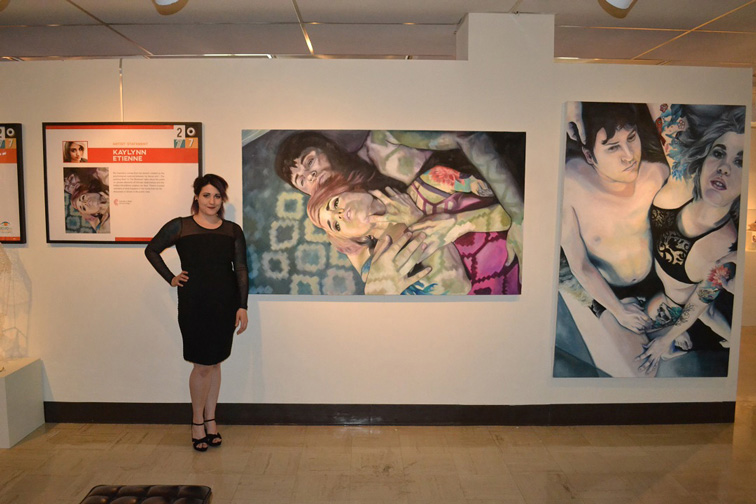 Kaylynn Etienne (Fine Arts, 2017) makes paintings that are, to put it in Fine Arts Professor Robert Robbins’ words, “the sort of paintings that reward the viewer for taking the time to really look at what is going on.”

And in late March, that sentiment was underscored as the Columbus College of Art & Design senior was recognized by the Association of Independent Colleges and Universities of Ohio (AICUO) as one of the winners of its 10th annual Awards for Excellence in the Visual Arts competition at a reception and exhibition at Capital University.

The awards honor senior students from Ohio independent colleges and were chosen by a panel of Ohio artists and members of the art community. The winners’ work was exhibited in Capital’s Schumacher Gallery and can be found online as well.

Etienne’s paintings “have been formed from raw tenacity, hard work, perseverance, and careful perception of her world,” said Robbins, who has been her mentor at CCAD.

“She paints the nuances of interpersonal relationships, and in that regard, her paintings are timeless, but the protagonists of her paintings are strictly of her generation. The figures in her works are pierced, tattooed and wear their hair in artificial primary colors, and these paintings celebrate who and what these people are. The paintings are large, and so the relationships she portrays are given to us at a scale that is larger than life, but these are small spaces with intimate interactions between people, so we, as the viewer, are pushed into this relationship in a nearly uncomfortable way. That, combined with a powerful realism, makes for works seem to have the power to push out into the world and bring us in,” he said.

Each of the participating colleges could nominate two outstanding senior artists for the online combination; Tyler Gaca (Fine Arts, 2017) was also nominated by CCAD.

Many of the winners and contest participants will be featured in a “walking exhibition” during Gallery Hop in the Short North Arts District on May 6, 2017.