Lunch plans? Travel to the Philippines and leave your passport at home.

Got preconceived notions of the Columbus food scene? If they’re bland and boring, toss them out and get exploring: Our neighborhoods are crammed with global eats from East Africa, Korea, China, Japan, India, and beyond. Even our food trucks (Columbus is home to dozens of them) are world eats on wheels. One example: Asian Persuasion, a Filipino- and Thai-inspired food truck operated by Jason Kibler and his wife, Michele, who’s the registrar at CCAD. 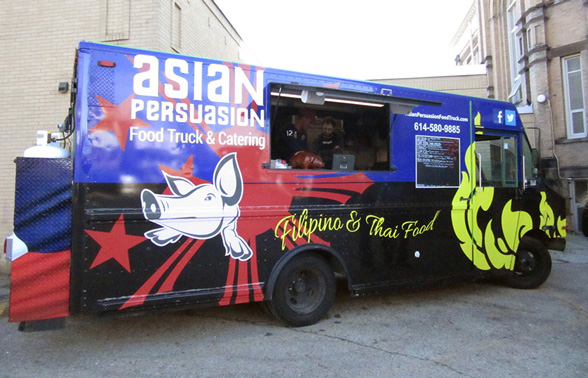 Jason’s mom is Filipino, and he dreamed of opening a restaurant where he could dish up the food she cooked at home. “We did a lot of traveling, a lot of visiting the Philippines. Everything I cook came from my mom,” he said.

But a brick-and-mortar business — with rent, equipment, employees, licenses, and permits — was going to be a huge expense. So, along with a couple of business partners, they bought a food truck and made it into a mobile Filipino kitchen. They’ve been on the road since June 2015.

Owning a food truck comes with its ups and downs — most restaurants don’t have to worry about transmissions and tires — but Jason takes it in stride. “It’s stressful, but you’ve gotta love it. Every food truck person I’ve met — there’s a lot of quirky people out there — they got into it because they had some love for what they’re doing. You’ve gotta have something in you to deal with the headaches.”

Asian Persuasion is fresh off a few summer food truck competitions and gatherings, and chances are you’ll find the truck on campus one of these days. And when you do, you’ll want to bring a big appetite along for the ride.

How to speak Filipino food

Jeepney (JIHP-nee) = A Filipino Jeep, and the name of a signature dish Jason Kibler has made for some recent food truck competitions