Making a monumental career from an arts education 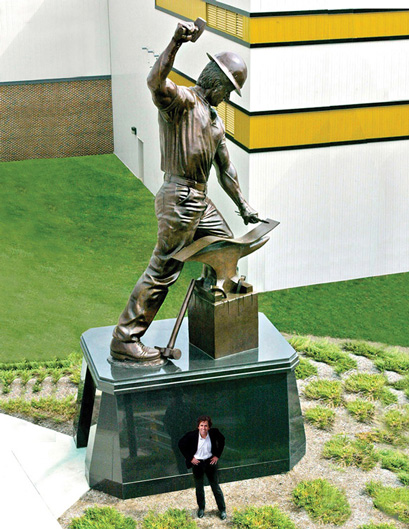 Jon Hair’s resume is a conversation piece. He’s been an art director, a designer, a musician (he says jamming with Jimi Hendrix was a high point), and an advertising entrepreneur. In 2000, at age 49, Hair added sculptor to his list of skills, virtually willing himself into a lucrative career creating more than 100 public monuments for universities, cities, and corporations.

Hair relishes being a renegade, going it on his own and forging his own path, critics be damned (or at least ignored).

A working musician, Hair started out as a Fine Arts major at The Ohio State University, where he tinkered with sculpture, creating reliefs of two Moody Blues album covers so his blind friends could “see” the images, and ventured out into the central Ohio farmlands to make carvings from granite boulders. After a brief detour that saw him leave school for an art directing gig at Coaxial Cable in Columbus, his then girlfriend, now wife redirected him to Columbus College of Art & Design, where he studied Advertising & Graphic Design.

In 1978, Hair was recruited by an ad agency in Akron. (Fun fact: He worked with CCAD faculty member C.F. Payne in Akron.) That was just the first step in a career that took him from Ohio to New York City to Las Vegas, North Carolina, and finally to Florida.

“Even though I had a very successful ad agency, I was kind of burned out,” he said. So Hair and his wife embarked on a tour of seven art shows around the country to survey the scene and see whether he could return to his fine arts roots. At the last art show, in New York, Jon saw a live sculpture demonstration, and that was it. He returned to Charlotte and rented a studio across the hall from his ad agency, where he began work on a collection of small bronze pieces he planned for street art shows in Florida.

While driving through the Everglades on the way to his second show, Hair saw a new casino going up. “They need a big bronze for their main entrance,” he thought. It was Monday and he headed to the tribal headquarters to meet with the chairman. After sitting in the waiting room for five days, he finally got in. Days later, he received his first monumental commission and a check for $110,000. He marketed that commission to win others and the jobs snowballed from there. 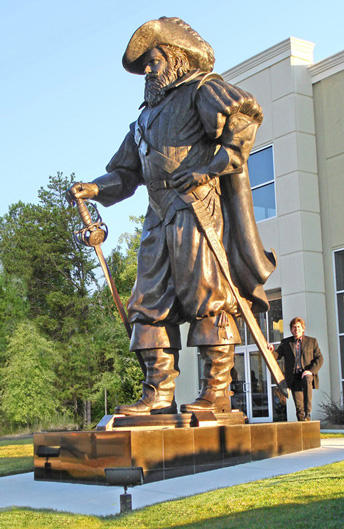 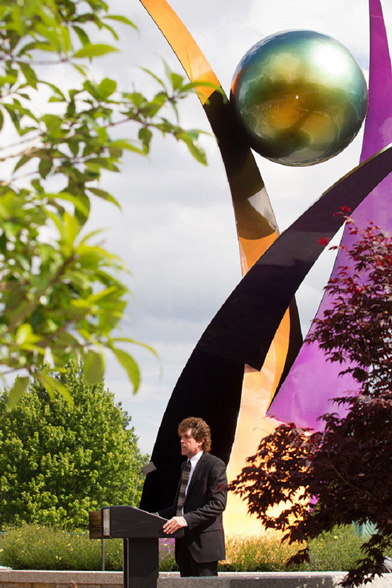 All those years doing advertising for clients like Husqvarna, IBM, and General Electric are still paying off — Hair knows how to put together a detailed, professional proposal that’ll wow potential sculpture clients. But he’s also finally listening to the artist who’s been inside him all this time.

“I think I was born with the art gene. I’ve never done art because I wanted to, I do it because I have to,” he said. “My whole life, I’ve had this gnawing inside of me, eating away at me like a wild beast trying to get out. So I just have to let the beast reign.”

Hair recently opened the St. Pete Sculpture Museum in Florida, where he is working on his latest commission, a 30-foot bronze gamecock for the University of South Carolina, his 35th college client.

3. Cincinnati, Ohio: Cincinnati Bearcat, a 14-foot bronze at the University of Cincinnati