Move over, JD Vance: a new voice in Appalachian culture 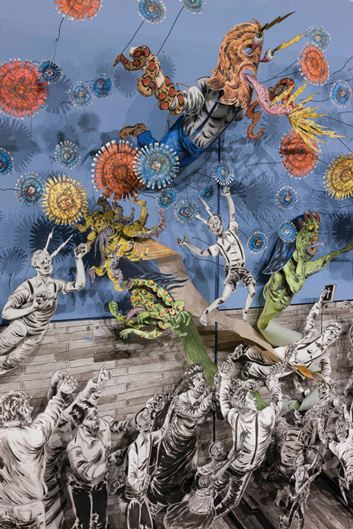 A master’s degree from CCAD will help you gain the skills to challenge cultural and art-world stereotypes. Take Chase Bowman (MFA, 2014). The Princeton, West Virginia native has been busy since earning his degree, opening a new art gallery in his hometown, teaching art and design and art history to college students, and hosting workshops and classes for locals to explore their own artistic sides. Read more below.

“I got pissed off. Really bad,” he said, laughing. “It’s pissed me off for years that [Appalachians have] been relegated to stereotypes or a cheap joke or just ignored completely as ’the place where they mine coal.’ I grew up here and I find it beautiful and the people really complex. Even when I disagree with them.”

The son of a coal miner, Bowman grew up in Princeton, West Virginia, surrounded by the culture and mountainous countryside that gives this region its aesthetic, like quilting and some of nature’s most beautiful landscapes.

Now, Princeton is also home to his new art gallery, Holler, so named as a double meaning for the valley between two mountains and his mission to shout out to the rest of the country just how interesting and important the art that’s being made here actually is.

The space opened in August 2017 with a show by Ohio artist Kimberly Roush (Master of Fine Arts, 2015). Her works are symbols of memory, a nod to the proud lineage of this land. For her exhibition, Roush skeletonized leaves and then printed photographs on top of them.

He cites, for example, Rebecca Morgan, who Juxtapoz magazine called “our Appalachian queen.” She makes contemporary cartoons and paintings that riff on Pennsylvania Dutch folk art through a bombastic, empowered female lens.

In addition to running Holler, Bowman teaches art history and art and design classes at Concord University in Athens, West Virginia. He’s realized it’s not just outsiders who have a warped connotation of Appalachia — the negativity can influence Appalachians themselves.

“I realized if I’m going to combat these stereotypes,” he said, “it was going to have to be in the form of an art venue.”

Holler hosts workshops and classes so locals (10,000 strong) and those who live in the neighboring areas can explore their own artistic sides and learn to value art’s role in their cultural legacy.

Bowman is currently building up a resource library as well, full of books, documentaries, and films about the history of Appalachia and the huge impact it has had on U.S. history, such as labor rights and agriculture.

“Appalachia is a lot more complex than what people think,” he said. “There’s a lot of diversity here believe it or not. A lot of different viewpoints. A lot of culture here that gets ignored because it’s easier to dehumanize someone if you don’t understand their culture and the dynamics of it.”

So what kind of impact does Bowman hope Holler makes?

“I want to hold up a mirror to Appalachians and say this is our culture. It’s beautiful and it’s valuable,” he said. “That means you’re beautiful and you’re valuable.”

“I want to encourage people to find their own words. Appalachians are told that their worth is less than that of people from other places. A lot of our opportunities are underprivileged, but that doesn’t make us less as people. I hope they come in and see this unusual, powerful work and think ’I’m powerful.’”