The new innovation hub Isn't on a coast — It's in Franklinton 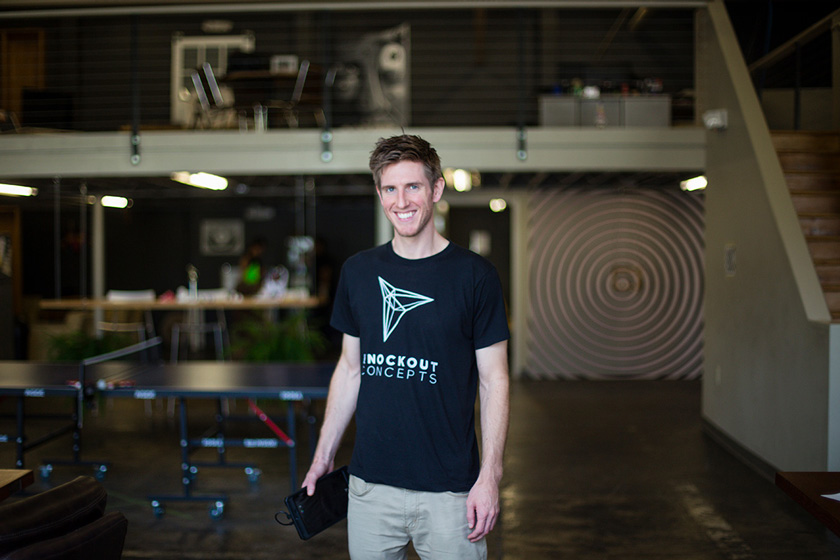 After graduating from CCAD’s Industrial Design program, Brooks Meyers headed out to the West Coast, but when he was looking for a place to start his innovative 3D mobile scanning company Knockout Concepts, it was Columbus that beckoned.

Meyers’ journey to entrepreneur began in rural Wooster, Ohio, where he attended high school. "Art school seemed to be an obvious choice at the time. I grew up in a family where that was, I guess, acceptable,” Myers said. He checked out numerous schools, but one kept coming to the top. “CCAD is of course a classic school. Even in Wooster, everybody knows about CCAD."

And it was on an orientation day that Meyers surveyed our programs and found his calling. “That's absolutely the moment in time when I heard about industrial design,” he recalled. “I figured, ’OK, this is exactly what I wanted to do.’ ”

“When I was young I enjoyed video game hardware and any idea of ’How is it made?’ A human interface that connects you to something interactive,” Meyers said. “I just thought that industrial design would be the real place to explore creating any kind of a product.”

While at CCAD, Meyers also began taking classes in time-based media, stoking his interest in animation and content creation. He became fascinated with photography and cameras. These studies added a new dimension to the way Meyers was thinking … literally. “I was starting to dip my toes into the 3D world at CCAD.”

Then he moved to Los Angeles where he worked in the television industry for about five years, doing graphics work for shows including Judge Judy. “I wasn't really happy. I wasn't going out and creating anything new,” Myers said. “There's not really a lot of down-and-dirty ’build something’ to it.”

It’s around this time that he had what he calls a “lightbulb moment.” “I got obsessed with this idea [that was] like a camera, where you can just take a photo,” he said. “I wanted something as simple and approachable as that to capture a 3D file, because in industrial design, you're working in CAD all the time, 3D graphics.” Meyers sketched out his idea and filed a patent in 2009.

When some lingering effects from a snowboarding accident compelled Meyers to move closer to his family, he weighed his future. “At one point, I thought if I was going to do this business or build this product, I would have to do it maybe in Silicon Valley or Northern California,” he said. “And part of it was, if I walk away from the West Coast and go back to Ohio, am I going to have to give up on this dream?”

It turns out the opposite was true. It was back in Wooster where he met the eventual co-founder of Knockout, Jake Kuttothara. The two shared an entrepreneurial spirit and a vision for where they should start their company: Columbus. They found their current home in the Franklinton neighborhood, which has become a hotbed of arts and technology.

It had gone through rapid transformation, but Meyers remembered Franklinton from his days at CCAD when he would skateboard down to the popular Dodge Skate Park. Everything was converging. “In [terms of] CCAD and Franklinton, it just seems like the natural place it would rollover. Just come down here,” he said. “To make a skateboarding analogy: All roads lead to Dodge, man.”

Meyers also sees Columbus as a city ready to burst with potential. “We always say, ’There's talent here, but we need a reason to keep them around.’ … It can be a startup environment,” he said. “Columbus is growing into a new hub of innovation. It really is.”

Meyers now leads a company developing proprietary software for handheld 3D scanning that holds limitless applications. And it all started when that kid from Wooster, Ohio, took the step of attending CCAD.

“Especially if you come from a rural area like I did, CCAD is an easy transition. It really is. They like to say it's a big city with a small-town feel,” Meyers said. “It's a city you can grow into if you want to stay after school, settle in, start your own business, maybe work from some cool design agencies, UI or UX companies ... or Knockout Concepts.”