For one Fine Arts alum, entrepreneurship was in the bag

Dan McKewen (2006, Fine Arts) founded Seagull Bags while he was still a student at CCAD. The company, which makes messenger bags for bicyclists and commuters, has proven wildly popular in Columbus and beyond. “I have been extremely blessed to work for myself,” he said. “I believe CCAD helped give me a ton of skills that have helped push me forward.”

We talked to him recently about his work, what led him to study art (spoiler: it involved an awesome high school teacher), and what he looks for in employees. 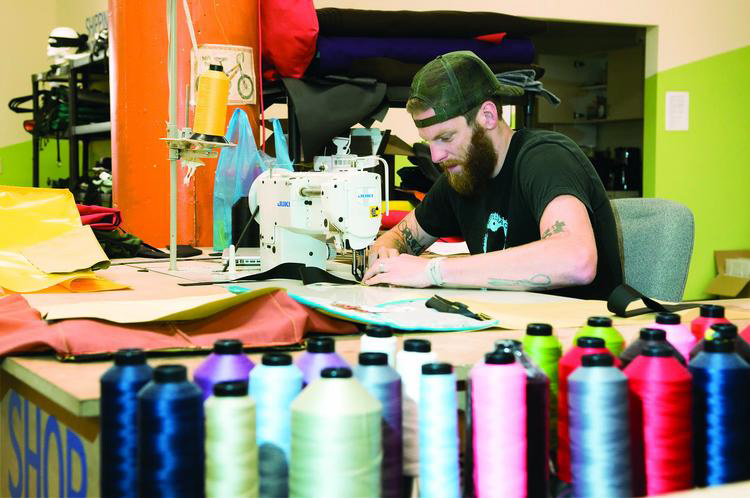 What led you to art school and to CCAD in particular?

I didn't necessarily grow up in a creative family. My parents were always very supportive with whatever I tried, but it was my high school ceramics teacher who really saw some potential. She suggested I put together a portfolio — just to see. My first thought was, “Yeah, right.” After a pretty brutal first critique, I went back and worked hard on it. I was pretty shocked to not only get in (to CCAD), but get a few sizable scholarships and grants. That really made it possible for me.

I went in with the desire to focus solely on ceramics. I continued with that focus but took to printmaking as well. CCAD was the best possible place I could have landed. I had really limited training going in, and that limited training was only in ceramics. The foundation year was what drew me in. I knew I would get the missing pieces that I didn't have.

When you were just starting out after college, what kind of a job did you think you wanted?

I was fortunate to have started Seagull while I was still in school at CCAD. I thought about trying to jump into the workforce immediately after school, but I saw a narrow window of opportunity to launch Seagull into something bigger. I took a risk and stepped into Seagull full time immediately after graduation. It hasn't been all roses and cupcakes, but it has been fulfilling work and invaluable as far as personal development.

How did you acquire your business acumen? Where would you point students who hope to run their own businesses?

Most of the things I have learned over the years have been through trial and error. Unfortunately, I can be kind of stubborn. There are some amazing resources out there that can get you going the right way so you don't have to make every mistake like I did. Find someone you respect or know who owns a business and just reach out. Second, go to the library. Sift through as many resources as you can. The E-Myth Revisited: Why Most Small Business Don't Work and What To Do About It by Michael Gerber and Let My People Go Surfing: The Education of a Reluctant Businessman by Yvon Chouinard were two resources that really impacted me along the way.

When you hire people just out of school, what types of skills and qualities are you looking for?

I look for self-starters. The biggest money waster you can have is employees who stop innovating in their job. Clearly, a base level of skill is needed, but humility and a desire to learn are crucial elements of valuable self-starters.

Why did you choose to stay in Columbus?

I was born and raised in Columbus. I have had notions about moving to other places but honestly, Columbus is awesome. In the past few years, I think people are realizing this more and more. Seagull probably would do pretty well in a place like Portland, New York, or San Francisco. But Columbus is great. There is tons of opportunity, tons of awesome talent, and it's cheap to run a business.