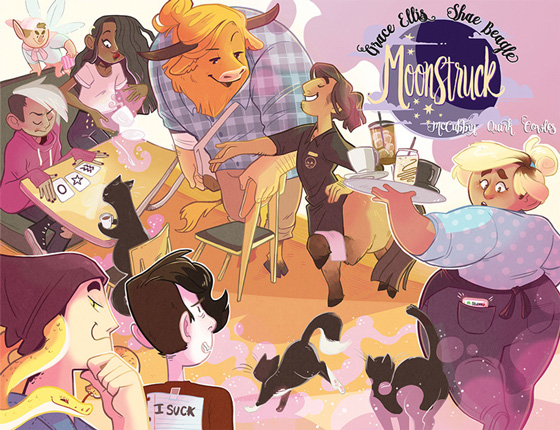 The first installment of Moonstruck, on Image Comics, about a barista named Julie who happens to be a werewolf, debuted at Comic-Con International: San Diego in July 2017, and it's garnering great press. The comic, by Shae Beagle (Illustration, 2017) and Eisner Award-winning writer Grace Ellis, has its origins in our Spitball anthology (part of the Comics Practicum course), was most recently featured in a number of media outlets, including:

The Columbus Dispatch: "It is difficult to imagine a higher-profile comics debut than the one Shae Beagle is pulling off this week."

Entertainment Weekly: "EW spoke with Ellis, Beagle, and editor Laurenn McCubbin about building this story and world (spoiler: it all started in a college class)."

Amy Poehler's Smart Girls: "Their [Beagle and Ellis'] storytelling presents a creative way to talk about 'otherness' and self-acceptance. Most importantly, it's really fun."

CBR.com: "Moonstruck is a comic that feels like it's in the right place at the right time."

The Mary Sue: "The fantastical story from writer Grace Ellis (Lumberjanes) and artist Shae Beagle is a genuine treat full of adorable magical creatures and a moving story about our barista protagonist, a werewolf named Julie ... "

Autostraddle: "Shae’s art is unbelievably masterful, it makes me want to cry all the time because it’s so beautiful."

Uproxx: "Grace Ellis and Shae Beagle’s story of modern love among the supernatural creatures is touching and more than a little cute, but it ends with a smart twist that makes it hard not to want more."

NJ.com: "There aren't a lot of comics like Moonstruck on the shelves of American comic shops."

For more press, check out the coverage from Columbus Alive and on A.V. Club’s Newswire.

Want to know more about this supernaturally good comic? Read about Shae in CCAD Stories.