She’s goofus and gallant (and so much more) 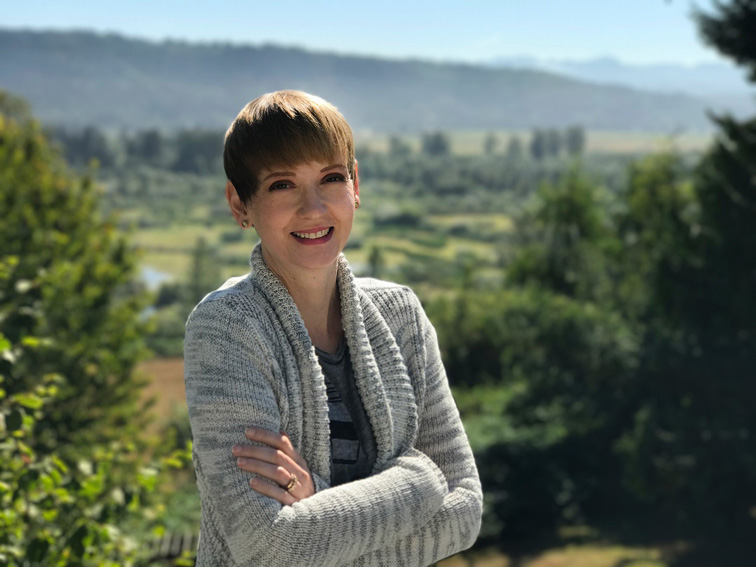 Eleven years ago, Leslie Harrington (Illustration, 1986) scored one of the most coveted gigs in the world of children’s book and magazine illustration. She was chosen as the new illustrator of Goofus and Gallant, Columbus-based Highlights magazine’s 77-year-old comic strip about two boys whose exploits conveniently open doors to lessons about manners, friendship and, basically, being a good person. Harrington affectionately calls Goofus and Gallant “the boys.” But one comic strip, no matter how cool, doesn’t satisfy all of Harrington’s creative energy.

Today she’s a thriving freelancer with a killer view outside her studio overlooking the Snoqualmie Valley in Washington state. Harrington shares just how she got there.

How did you gravitate to children's and educational illustration?

I kind of fell into children’s illustration after the Seattle area’s internet boom went bust. I was here in the mid-’90s and worked at a number of startups. (One was a Paul Allen company where Hollywood stars came to do CD-ROM projects — Clint Eastwood, Peter Gabriel, Ralph Steadman come to mind.) All the while I had experienced offers of stock options instead of paychecks, running to the bank to cash my check with the hope there was still money in the company’s account. Crazy! My husband, Mike, was at a fairly stable company and after much consideration, we concluded that I could make just as little (ha!) and maybe more being self-employed than sticking with crazy startups.

How did you land Goofus and Gallant?

I put my portfolio together, sent out promo postcards — and my timing was perfect. Highlights was redesigning the look of the magazine, updating longstanding features, and I was given the opportunity to create my version of Goofus and Gallant. I was told that there were four other illustrators they were testing, who had been at it for months, and if I wanted to meet their deadline I had two weeks. Amazingly, my boys were picked! I have been creating Goofus and Gallant since 2006. It’s a great honor to be a monthly contributor to a magazine that I grew up with as a kid. Goofus and Gallant have evolved as my style has changed, and the editors have their requirements, too. They were very cartoony in the beginning. This year, we did a completely new look that is simpler and more decorative, with shapes and textures.

Once I got Goofus and Gallant, it was like a stamp of approval and I started getting many more assignments from children’s publishers and education publishers. I still promoted myself through my website, illustration portals and postcards, but many companies found me via Highlights. 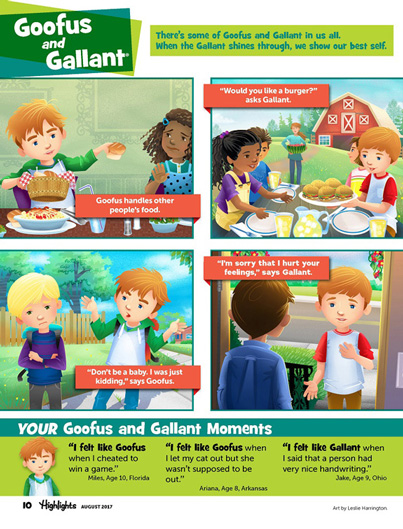 How did you develop your style?

My style has radically changed since I graduated. I was primarily a watercolorist then. Portraiture painting with (emeritus professor Dennis) Drummond was key in understanding light and how it plays against a face or object. I still apply those ideas to my characters and landscapes. When I worked in the game industry, I was a background painter and used the computer more. I learned to simplify shapes and was exposed to other styles. For games, you guided the player by using light sources to indicate exits, entrances and hidden objects and reflected colors indicated color themes to new or past levels in the game. I guess I carried that experience with me. Now, I’m all digital. I use Photoshop and Click Studio Paint. I used to sketch with paper and pencil but three years ago, I got a Wacom. That was a long time coming. My husband and friends thought I was insane for not adopting that sooner. I agree! However, I still use a mouse the majority of the time to paint — my tired old Microsoft mouse.

What made CCAD your choice for art school?

I was always drawing, probably a common trait to the majority of students attending CCAD. When I was in high school, I enjoyed drafting and art classes and I thought the combination was a good match for interior design. My family did research and my dad, who worked at The Columbus Dispatch, knew someone in the art department there who was a CCAD grad. Dad admired his work ethic and knowledge.

I flitted around reviewing other schools, but CCAD was always the best fit for my family’s budget and its local location. My high school received two or three scholarships to encourage students to attend CCAD, and that sealed the deal.

Funny thing is, once I got there, I discovered how much I loved to draw, even more than I thought possible. My idea of being an interior designer disappeared. I discovered what illustration was and how it was the perfect fit for me. 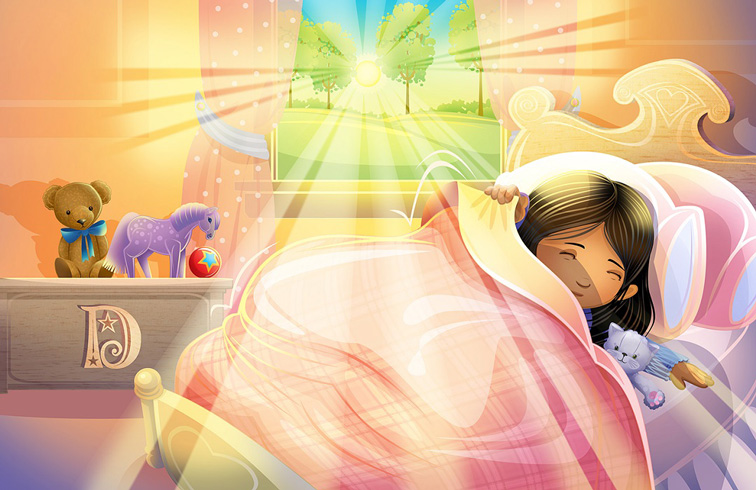 Leslie Harrington’s tips for being a good freelancer

Even an established illustrator with a high-profile standing assignment needs to market herself constantly to woo new clients. “The competition is fierce,” Harrington said. “You can’t sit back and say, ’I’m a Highlights illustrator’ and just expect work to come to you — you still have to promote yourself. Otherwise, new avenues aren’t going to be out there for you. You also must meet your deadlines.”

She sets aside chunks of time between big projects to refresh her website, updating images and featuring any new projects or clients. She sends postcards to prospective and past clients as a gentle reminder she’s available for more work. And she’s experimented with advertising her services on websites like Children’s Illustrators to varying degrees of success.

When she’s landed an assignment in an unexpected niche, she focuses marketing and promotion on other publishers in that niche. She did cover art for a book about the Ten Commandments a while back, and now she gets noticed by other Christian book publishers. Today, her work is split about evenly between educational and Christian publishing.