Students find inspiration from around the world for Chroma 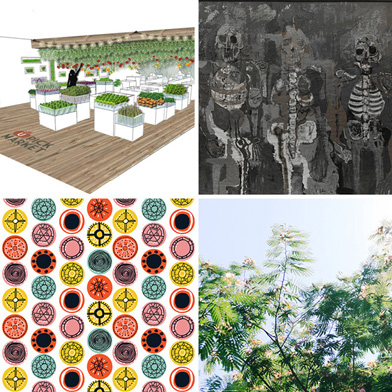 At Columbus College of Art & Design, students find inspiration everywhere: on campus, throughout the city and around the world.

We recently talked to four students who took cues from around the globe when working projects for an exhibition called Chroma: The Best of CCAD 2016.

Tamrin Ingram is a senior studying Photography at CCAD. She spent part of her childhood in Winnsboro, Louisiana, so she looked back there for inspiration for a documentary called Under the Mimosas. Her photographs showcase the contrasts in the South — like the lush, green plants that cover rusty, old school buses and pickup trucks. “The summer is very, very green and vibrant,” she said. “But things rust really quickly down there because of the humidity.”

Vlado Petrovski is a 32-year-old senior studying Fine Arts at CCAD. He’s headed to MICA (the Maryland Institute College of Art) to study painting this fall. He grew up in Macedonia, in a city called Bitola, and is inspired by that time in the Balkans, from his family to the influences of communism. “The narrative comes from my memories,” he said.

Lauren Rassenfoss is a senior studying Illustration at CCAD. She grew up in Louisville, Kentucky, but her inspiration for her project at Chroma comes from around the world. She created a project called Globe Girls that showcases graphic T-shirts and patterned fabrics inspired by six of the seven continents. (Sorry, Antarctica.) Her patterns are inspired by Juneau, Alaska; Cusco, Peru; Lisse, the Netherlands; Nairobi, Kenya; Lhasa, Tibet; and Auckland, New Zealand. “I’ve always been inspired by global design,” she said.

Katlyn Shuler is a senior studying Interior Design at CCAD. She grew up in Cincinnati, and she’s interested in food security and its global implications. “Our population’s growing too fast, and we don’t have enough land,” she said. So, she turned to vertical farming and hydroponic plants to design a market that would help feed the world.

Chroma: The Best of CCAD 2016 showcases the best student works from all 10 majors and the Master of Fine Arts program at Columbus College of Art & Design.

The event on Thursday, May 12, is free and open to the public. (Parking's free, too.)

Stop by, explore our campus, look at art, grab a bite to eat, sip on a craft beer, screen print a shirt and get a temporary tattoo.

See more from our students here.