They get out and design

Treehouses go upscale in a project from Columbus College of Art & Design students, who teamed up with Moody Nolan and peers from Ohio State University for a project on view at the Columbus Dispatch Home & Garden Show this weekend.

The show, which runs Feb. 17 - 26, 2017 at the Ohio Expo Center, helps homeowners beautify their residences inside and out.

Previous years’ Home & Garden shows have featured concepts such as smart homes, cabins, and tiny homes, said Tom Holmes (Interior Design, 2013) of architectural firm Moody Nolan, which is tasked each year with coming up with a feature exhibit to draw connections among the exhibitors. This year’s exhibition theme is “Bringing the Outside in.”

Holmes served as project manager for the work; he said he and his boss, Moody Nolan Director of Environmental Design Earl Lee III (Industrial Design, 2001) have benefitted from the cross-disciplinary nature of their work, and thought it would be valuable to bring in students from a range of fields to see what they might come up with for the show.

To that end, the team of students and professionals created a “deconstructed home” on the show floor, featuring products by some of the more than 350 craftsmen, experts, professionals, and vendors at this year’s garden show.

The CCAD students, including Tara Kursinsky (Interior Design, 2019), Tobias Katz (Industrial Design, 2017), and Katie Schwendeman (Advertising & Graphic Design, 2018) began work on the project as a special topics course in the fall semester. They were joined in the endeavor by a trio of Ohio State students; one studying architecture, and two majoring in public relations.

Given the students’ varied backgrounds, plus the variety of builders involved with the project, “I think this is going to be the coolest one yet,” Holmes said.

Among the featured exhibit’s eye-catching elements: a “bungalow bathroom” with an outdoor shower (and a green wall provided by the CCAD alumni at STUMP), a bedroom built inside an elevated treehouse, a campfire-inspired living room, and a kitchen that spans the indoors and out.

“We made it this cool, woodsy, rustic retreat … we broke down each room that was important to the house and found ways of bringing nature and natural materials into the space,” said Kursinsky. 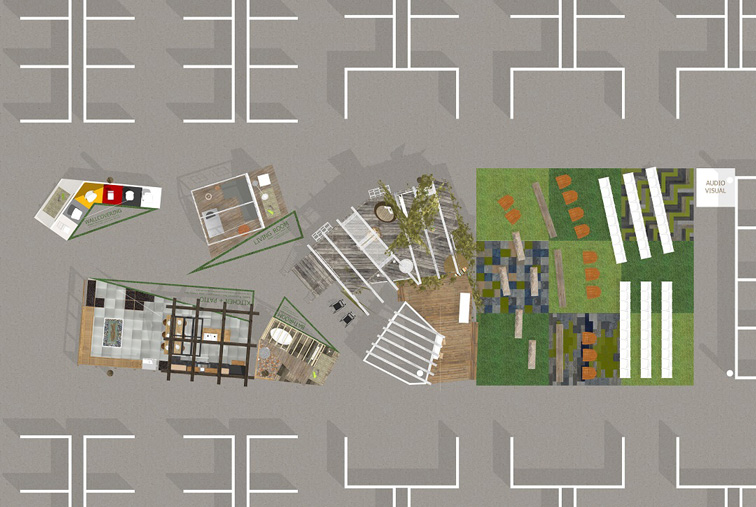 Katz designed the bathroom, with the concept of a “re-imagined outdoor shower.” He thought, “What would happen if you have an outdoor shower inside your home?” Katz said his favorite part of the room is the bathroom sink.

“The faucets are actually mounted to the wall, and then we have a grate in the floor, so you can turn on the sink and have a really nice waterfall all the way to the ground,” he said.

As graphic designer for the project, Schwendeman helped design the exhibit’s brand and pitch decks, aided in creating its signs, and also helped in the conception and ideation of its theme, as well as the physical exhibit itself.

She said she was attracted by the opportunity to work across disciplines, and with students from other schools, as well as with professionals.

“In school, it's easy to get pigeonholed into only working with people who specialize in the same things as you, but I was excited to get the chance to work with people who would help bring new perspectives to my design practice,” Schwendeman said.

Likewise, Kursinsky said her biggest takeaway from the project was in “understanding how to work on a budget, and to work with other designers — especially ones who are not in your field. And definitely knowing how to collaborate.”

“I loved this opportunity for our students to be able to collaborate not only with professionals and other disciplines but also with students from other schools. It was a great way for the resources in Columbus to come together,” she said.