Cori and Benjamin Rowley met while studying at CCAD and found their creative (and romantic) fortunes entwined almost from the start. Today, they co-own Yellowood Design, where they restore and design vintage and antique axes, hatchets and other blades, while working other full-time jobs and raising a family. 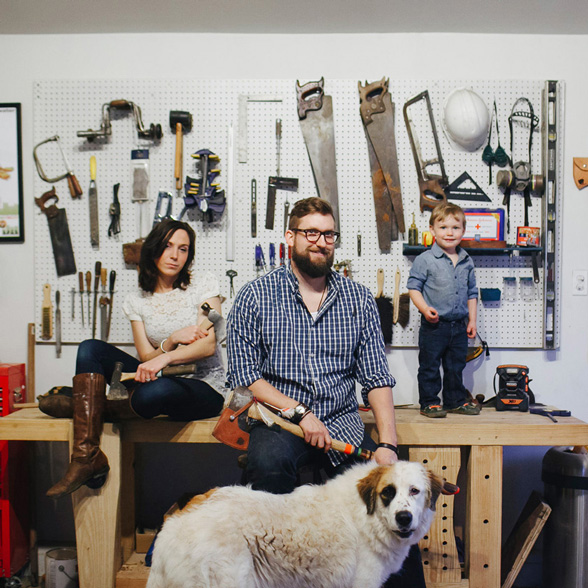 Every summer for the last five years, Cori and Benjamin Rowley have invited a few of their best customers to Axe Camp. Envision a bunch of grownups out in the woods, learning to use (and even have fun with) their custom-restored and -designed axes, hatchets and tomahawks, dining and camping together and getting back in touch with the great outdoors.

This sense of connection, history and appreciation for handiwork inspires the Rowleys and their Yellowood Design Studio. “We caught the wave at the right time of people wanting to get back outside and use their hands,” Benjamin said. “There are a lot of people who are looking for something to connect them back to the past, and an axe is clearly a symbol of that.”

The story of Yellowood began in 1996, when Benjamin received his late great-grandfather’s axe. “It was just one of the things that I had of his, and I hated to see it rusting away in the corner.” So he lovingly restored it. “The reason we kept going was we found that a lot of people were in the same situation. They had an axe that was their father’s or their grandfather’s, and then we started noticing that there were a lot of axes out there that just needed cleaned up.”

The Rowleys have a handful of standard designs, and they also do custom work for clients who, like Benjamin, have come into possession of treasured old blade tools.

“Those are a little more of an artistic puzzle for us,” Cori said. “Some people let us know, ’My husband likes the color green, trees and his children.’ Or, ’My husband or wife is a really simple person.’ We try to pick up on as many clues as we can.”

At CCAD, Benjamin studied Interior Design, and Cori studied Industrial Design, which set them up to land jobs at L Brands and Design Central, respectively, and launch Yellowood.

“The education we got (at CCAD) helped us to be flexible and curious and bounce around and do different things and try different pathways,” Benjamin said. “It’s made for some interesting jobs and career paths.”

The name comes from the first line in Robert Frost’s famous poem The Road Not Taken: “Two roads diverged in a yellow wood.”

Check out their work at yellowoodesign.com or make an appointment to visit their studio in Canal Winchester.