For this working artist, CCAD taught her the how 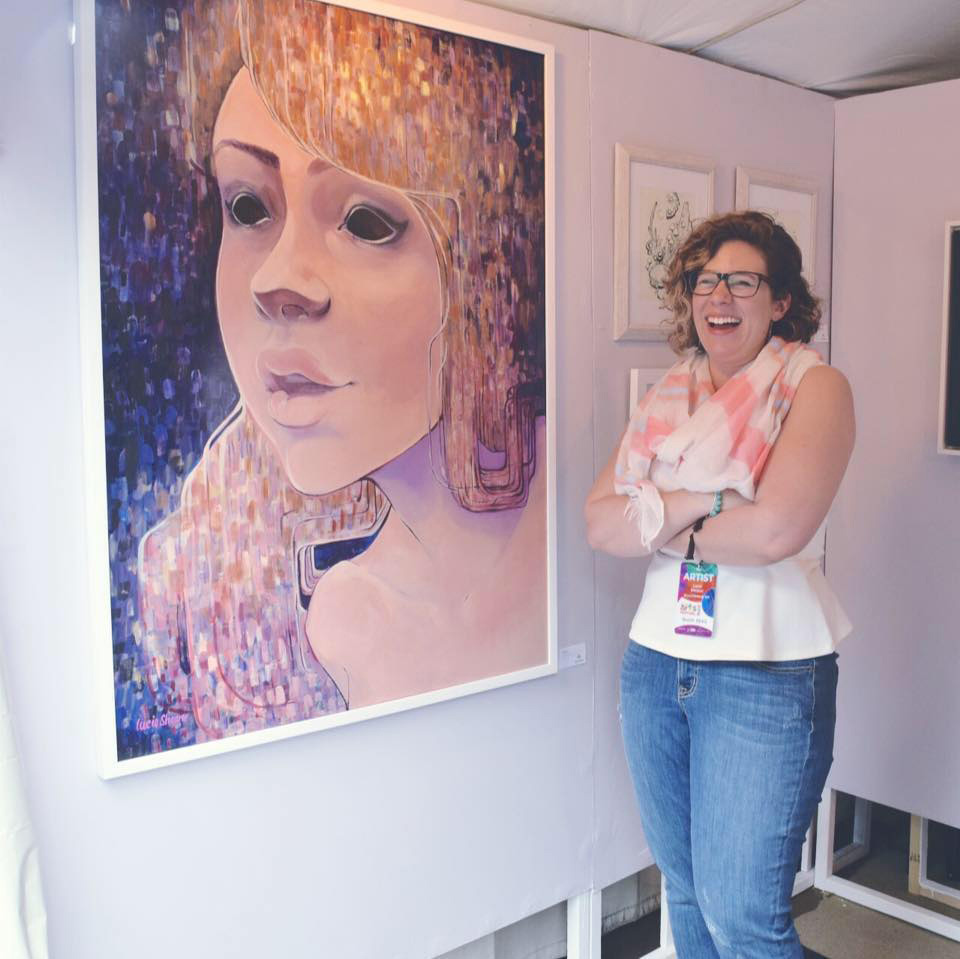 When she was growing up outside of Akron, Lucie Shearer knew what she wanted be. She just didn’t know how.

“I knew that I wanted to do art after school, but I didn't know what that meant or what that looked like,” Shearer said.

For Shearer, that “how” was as much of a part of what she learned in her time at CCAD as the furthering of her art skills. Now she’s both a working illustrator and painter and a part-time instructor at CCAD, currently teaching a course in professional practice so another generation of artists can learn the “how.”

Like many eventual artists, Shearer started drawing at a young age. “It's always been an innate part of who I am to the point where people would have to tell me to stop,” she recalled. She was engaged by cartoons (specifically Pokémon) and found herself emulating that large-eyed anime style — a style she would eventually try to shake.

“I realized how dorky it was, so I tried to veer away from it, but if you look at my work today you still see the inspiration,” Shearer said with a laugh. “In high school, I tried really hard to deny I was a dork. And now I totally own it. I just am who I am.”

Shearer was fortunate that her high school had “a pretty good art program” that even included some AP courses in drawing and design. After a CCAD representative gave a presentation to her class, the school became her first and only choice. Her parents needed a little convincing.

“My parents were like, ’OK, you can't get a fine arts degree. I don't just want you making pottery,’ which was always my mom's example,” Shearer said. “’I want you to get a degree that will be applicable in the real world.’ ”

When Shearer enrolled at CCAD, she quickly realized there were a lot of “real-world” lessons she would be learning — plus an awakening on her own level as an artist.

“I had a little bit of an ego with my art,” Shearer recalled with a grin. “I thought I was better than everybody, and CCAD put me in my place. I was the story of a big fish in a little pond, suddenly thrown in the ocean, and I realized, oh, this is my skill level. This is who I am.”

Looking back, Shearer has realized just how deep her education at CCAD went with a lesson from her first or second week. “One of the things that has stuck with me from CCAD … was the fact that everything that we were learning each year was being ingrained in us so that years later suddenly we would do it naturally,” she said.

Those ingrained lessons are now applied to Shearer’s everyday life. After graduating in 2011, she took a break from art in her day-to-day life until it beckoned her back. “Right after school there was kind of this dip. I wasn't creating art, but I knew I wanted to get back into it,” she said. “So about three years ago, I decided I'm going to be serious about this. I don't want to work my day job.”

Shearer soon found a home for her art endeavors in one of Columbus’ emerging artist hotbeds, Franklinton. She rented studio space in 400 West Rich, a refurbished former factory space that has become the center of the neighborhood’s arts-based boom.

Shearer was one of a group of artists instrumental in the founding of Franklinton Fridays, a monthly event to highlight the emerging art and culture from the district. Her work is also featured on the poster for this year’s Independents’ Day, a multi-day festival that celebrates the independent arts, music, and culture of Columbus. The festival made Franklinton its home in 2014.

As she has seen success with her painting and illustration work — “I've managed to gain a little bit of a following here in Columbus,” she said modestly. “I have a little bit of a fanbase.” — Shearer also credits the environment of Columbus, particularly Franklinton.

And as Shearer learns how to make it work as a professional artist, one of her most important skills learned at CCAD still drives her every day. “It taught me work ethic,” she recalled. “I would not be where I am today if I did not have the work ethic from that school.”