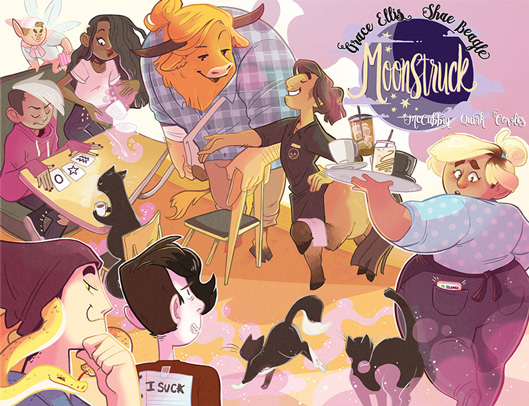 The new monthly comic book, Moonstruck, will make its debut this summer, with the first issue set to come out in July.

Beagle, an Illustration major who will graduate from CCAD in May with a BFA in Illustration, first met Ellis — an Eisner-award-winning comics writer — while working together on Spitball, a collection of comics made in CCAD’s Comics Anthology Practicum class, where student artists are partnered with professional comic writers to collaborate on short comics.

“The experience has been amazing,” Beagle said. “From the first little mini comic we did in Spitball, Grace and I worked together really well. We had really similar senses of humor and ways of thinking.”

“Working with Shae has been a dream,” Ellis said. “They’re so smart and talented and hard-working and just a treasure,” Ellis said. “Shae’s art is really bringing something new and unique to comics, and I’m excited to continue working with them. They’re a real pro.”

“It’s a pretty remarkable thing that Shae is still in school and getting published,” said McCubbin, who is also the editor on Moonstruck. “I’ve known them since they were a first-year student, I’ve had them every single year, and I’ve always known that they were incredibly talented. I was really happy that their time at CCAD was able to give them this kind of opportunity.”

Such opportunities are a big part of why CCAD decided to start a Comics & Narrative Practice program.

“This great success that Shae Beagle, an Illustration student making comics, is having is an example of exactly why CCAD is launching this program,” said Stewart McKissick, Chair of the Comics & Narrative Practice major. “Comics are both an important form of cultural communication and a big business, and our students have increasingly been making them on their own and asking for more comics in the classroom.”

Moonstruck is already gaining notice in the press, including mentions in The Hollywood Reporter and Comics Alliance. Ellis said she’s thrilled with the work.

“I'm super proud of this book; it's definitely the best thing I've ever written,” Ellis said. “Moonstruck is full of things that I like: It's fun, it's character-driven, it's got a lot of room for creativity, it's got queer people — not to mention magic AND close-up card-trick magic. And lots of coffee! It's ultimately about what happens in a relationship when you jump in too fast, but it's equally about friendship, adventure, and what it means to be normal.”

Beagle is not the only person with CCAD connections working on the book. Moonstruck’s colorist, Caitlin Quirk, is a 2016 CCAD Illustration grad. And a number of other recent CCAD grads are finding success in the comics world, including 2016 CCAD Illustration grad Alissa Sallah, who is the editor and colorist on an upcoming romance comic Sleepless (also from Image Comics).

Fantasy creatures are living typical, unremarkable lives alongside humans, and barista Julie strives to be the most unremarkable of all. Normal job, normal almost-girlfriend, normal ... werewolf transformations that happen when she gets upset? Yikes! But all bets are off when she and her centaur best friend Chet find themselves in the middle of a magical conspiracy. Will Julie and Chet be able to save their friends? Is Julie's dogged determination to be normal a lost cause? Who's going to watch the coffee shop while our heroes are out saving the world? Read more here.