Talk to one of our amazing counselors today! Click here to request more info!

Dive right in. Fearlessly create. From day one you get your hands dirty at Columbus College of Art & Design.

Skim our student-curated survival guide to CCAD. Click through to see our fav art & design stuff and CCAD program highlights. 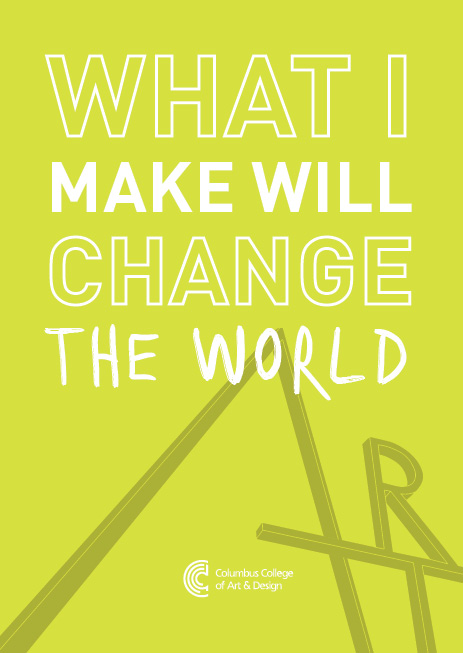 CCAD's influence is apparent in Franklinton, Columbus' oldest neighborhood. The arts district is packed with affordable artist studios, emerging galleries, and countless high-tech design companies — all of which are filled with CCAD alumni and students.

Our alumni have gone on to start their own businesses, work at big-name companies, and use their art and design degrees in all sorts of ways.

Check out a few of their stories.

Columbus, with its thriving creative communities, has numerous art and design spaces and ever-expanding districts that are closely tied to CCAD artists and designers. The city has all the culture and amenities of a big city, but in a way that feels accessible and achievable.

Studio Art with an Emphasis in History of Art & Visual Culture

At CCAD, we want every student to have an opportunity to pursue their passion, regardless of their means.

Funding your education at CCAD may come from several primary sources — some of which you may or may not have to repay after graduation and others that you'll never have to repay. Your final award package may be composed of scholarship, grants, loans and student employment. Each student award package is different, and we encourage you to explore all the funding options available to you.

We recognize that a college education is a huge investment for most families. So we do our part by working hard to enhance the educational experience and provide value that will accompany students for the rest of their lives. View CCAD's current tuition and fees.

CCAD offers a limited number of grants. These grants are based on the financial need calculated once a student has submitted their Free Application for Federal Student Aid (FAFSA).

Columbus is the capital of Ohio, and, as the 14th largest city in the U.S.,¹ Columbus is bigger than Boston, Denver, and Seattle.² Here, you’ll find all the culture and amenities you’d expect in a major city, with the friendly and approachable attitude of the Midwest. And because CCAD is closely tied to the city’s numerous art and design spaces and ever-expanding districts, you’ll have plenty of places to experience creativity and showcase your own.

Learn more about CCAD and Columbus. Columbus by the numbers

No 1 opportunity city in the U.S.

No 2 city for gamers in the midwest

No 3 most fashion designers — behind New York and Los Angeles

No 4 best city for female entrepreneurs

No 5 for work-life balance

No 6 U.S. cities with the youngest entrepreneurs

CCAD by the numbers

CCAD is in the top 5 of graphic design schools in Ohio.

CCAD is in the top 25 fashion schools in the world.

CCAD is in the top 10 of design schools in the US.

Columbus is a design hotspot.

CCAD is the No 1 illustration program in the Midwest.

CCAD is in the top 15% of illustration programs nationally.

CCAD is in the top 15% of design programs nationally.

CCAD is in the top design schools from GDUSA

CCAD is in the top 15% of animation programs nationally.

CCAD is a recognized Toon Boom Centre of Excellence.

CCAD is one of the best values when choosing a college.

Columbus is the No 6 best place for creatives.