The students displayed concepts for Harley-Davidson, including logo updates, virtual reality experiences, and smart, electric scooters. The concepts were first shown at Chroma: Best of CCAD in 2019. Bob Althoff, former owner of A.D. Farrow, the oldest Harley Davidson dealership in the U.S., who recommended they be part of the expo, says Industrial Design Assistant Professor John Youger.

Many attendees thought the student project was an official Harley project or by a licensee, says Youger.

SooYoung Kwon (Industrial Design, 2020), says attendees were impressed by what they saw from CCAD.

“We got really good responses from the audience,” Kwon says. “A lot of them were asking for the price of the scooters and when it would be out for sale. We had to respond that they were conceptual models and they weren't in the market. 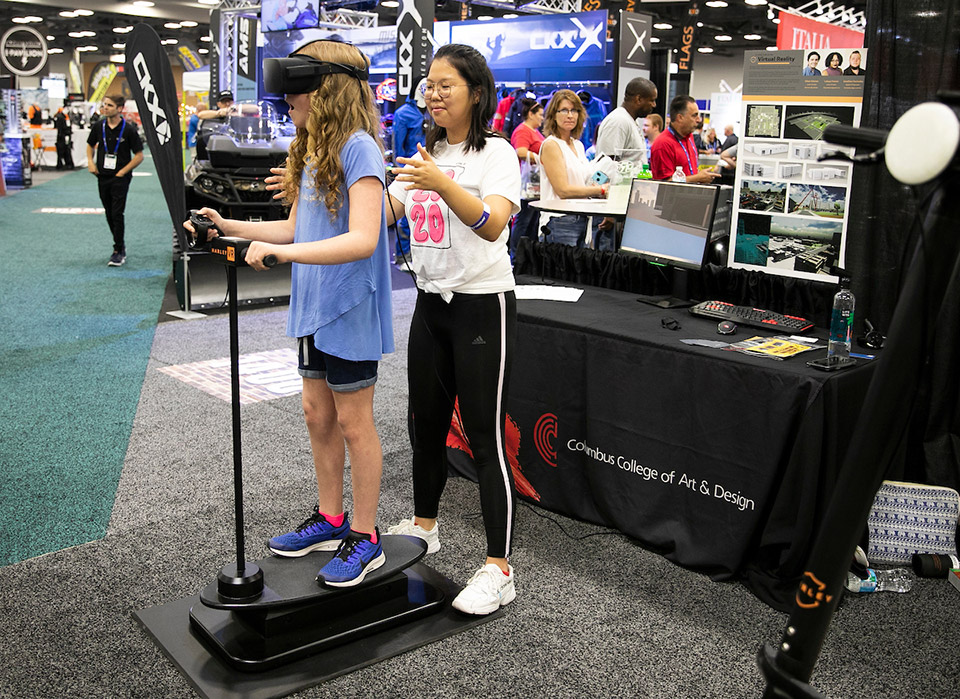 “He came up, looked at the scooters for a minute, and said, ‘I didnt’ know we were doing these?’” Bowdish recalls, saying that he told the man that he was looking at a concept project, and took him through the process before he explained that he wasn’t from A.D. Farrow, but from Harley-Davidson corporate.

“After that shocker, he then went on to tell us how well we did. He was impressed with the concepts, the re-branding, mobile app, the VR experience and all the research and thought we displayed and how he can’t wait to get back to share what we pulled off,” says Bowdish, who continued, “This experience was beyond rewarding, I think we all feel that way. To take a project that every single one of us pulled together to make sure it was the best we could do and have it then displayed on a national stage like that with that kind of feedback … there’s nothing like it.”

Youger says he thinks this was a positive experience for the CCAD Industrial Design students. “I believe that they learned they can create viable designs that offer mass appeal to the targeted consumer. It is rare that students get to see in real-time public response to how their ideas stack up against well-known brands within an industry,” he says.

Learn more about Industrial Design at CCAD or apply here.