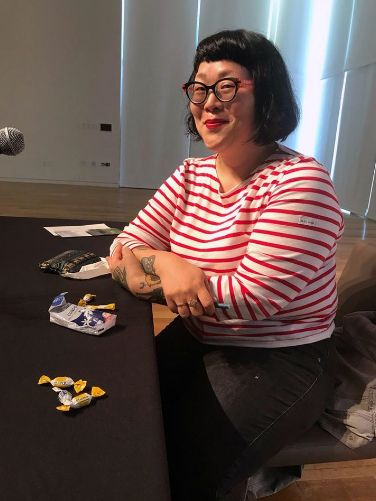 Chicago- and Paris-based comic artist/illustrator Laura Park has a number of accomplishments under her belt. Her work's been in a number of anthologies, she was part of Cartoon Network's Over the Wall, and she illustrated James Patterson's young reader series I, FUNNY.

And now Park can add another item to her C.V.: 2017 winner of the Columbus Comics Residency (formerly the Graphic Novelist Residency), co-hosted by Columbus Museum of Art and Columbus College of Art & Design.

Each year, a committee of local comic critics, curators, and creators seek graphic artists from outside Columbus who demonstrate an experimental approach to creating comics and graphic novels. As part of the three-week residency, Park is staying at the visiting artist residence on CCAD's campus through Oct. 14, 2017, interacting with students during her stay.

The residency includes an exhibition at Columbus Museum of Art, curated by Jeffrey Sims and on view through February 11, 2018.

"The exhibition was curated by Jeffrey Sims at the Columbus Museum of Art. Together we selected a mix of work – mostly comics but also some illustration and sketches. Also my sketchbooks will be on display in vitrines, which I will also fill with some scattered little weird objects I’ve collected. If you’ve never seen an antique watchcase filled with baby teeth, this is your chance," Park told Columbus Alive.

She also discussed her excitement for her stay in Columbus, as well as the importance of events such as Cartoon Crossroads Columbus. Read more from the Alive interview here.